If your cat were a super hero who would they be and why ?

Patches would probably be the flash because for a cat that is normally so chilled when he gets the zoomies, he's fast

. Bandit is a different story, he'd be a bad guy. So probably loki, because he's always causing chaos but he's funny with it. He also wants to overthrow his brother and become top cat.

Zorro is already a masked crusader, but since he has mostly hung up his sword, inwardly now he reminds me of Magneto… b/c he is sagacious, and secretly knows what I’m thinking before I do.

lucky would be super girl and stardust would be black widow

Charlotte would be Wonder Woman. She is the most confident cat I have had. The first visit to the vet which was only a couple of weeks after I brought her home from the shelter she made an escape from the exam room because she wanted to investigate what was on the other side of the door. I have never had a cat do that. They usually don't want to go anywhere except back in the carrier to go home. She was in a mostly cage free shelter with a number of other cats, I think that is where she got that way.

Zoe would be The Flash! She's had to get more meds than usual this year and that girl has learned to disappear in a nanosecond if she thinks I'm approaching her with a syringe or pill shooter. 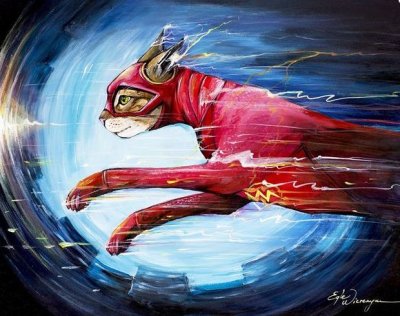 I think due to his personality, Chester would be Superman, however, he's also a little clumsy so he's probably more the mild mannered Clark Kent. Thinking further though, he LOVES to climb things...so perhaps Spiderman would be a good fit.
Lily wouldn't be a super hero....she's more of a mob boss that would have others do her biddings while enjoying the high life of being rich.
Bynx would be Batman. He's cunning and has the ability to use everyday objects as weapons, so I'm sure his use of a utility belt would be fantastic. He's also quite stealthy (when he wants to be).
Plus he looks good as Batman...don't you think? I don't know enough about superheroes to say what my cats would be.

My cats would probably those in the Umbrella Academy - siblings in a dysfunctional family. LOL

Barley would be Klaus Hargreeves, always sleeping and inactive.
Graham would be Number Five - Now you see her, now you dont, super fast and super intelligent.
Bourbon would be Vanya Hargreeves - you don't know how strong her powers are until you piss her off.

Sundar would be Fat Fury... it's only one letter away from Fat Furry and he is a tad overweight but very strong.