Today's new thing is that when I pet Fiddle, Cribbage comes close to get some of that.

PS can't give Cribbage allll the attention, Fiddle is still friggen adorbz as ever!! 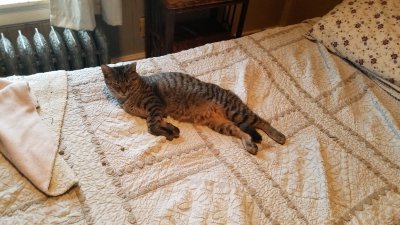 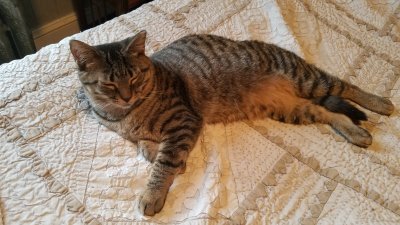 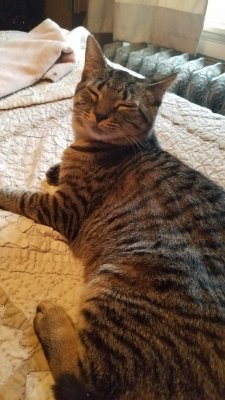 m3rma1d said:
Today's new thing is that when I pet Fiddle, Cribbage comes close to get some of that.

m3rma1d said:
Thank you so much @mani for changing my thread title and moving it to a new forum!

I love posting all the updates, especially when Cribbage makes new progress, but it's been kind of lonely getting really excited about her changes and not seeing anyone here getting excited right along with us.

Hopefully now we'll drum up a nice audience to enjoy watching her transformation.

I've been with you from the start but I've been working so much overtime that when I get home Gypsy needs lots of attention and doesn't let me get much done including posting. You guys are doing great.

dustydiamond1 said:
I've been with you from the start but I've been working so much overtime that when I get home Gypsy needs lots of attention and doesn't let me get much done including posting. You guys are doing great. 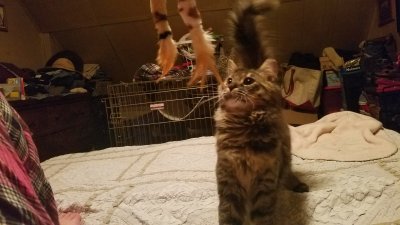 I was half asleep last night drifting off to a podcast and suddenly I felt my bed shaking and I got jostled fully awake...

The gals were grooming each other to sleep.

Cribbage is getting really good at pettinz.

This morning as a 4 week anniversary present, Cribbage PURRED as I pet her. I got a video but it sucks, so I'll try and get another one later.

Meanwhile here's a pic of the two hongry little gals.

It's hard to get decent video haha so I just posted the one from yesterday.
Our very first PURR-PURRZ!!


I vacuumed after, I swear.

I'd been nervous that if I ran the vacuum she'd freak out and we'd have to start over. Both her and Fiddle only hid whilst I was actually vacuuming and just a few minutes afterward. Yay!

Little Miss Cribbage is getting awfully close to my lap over the last couple of days... 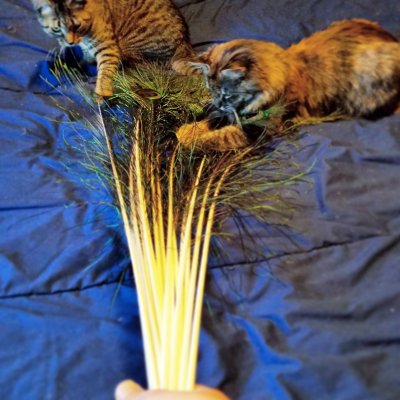 A friend sent them 20 peacock feathers off their wish list, they're sooooo excited! Definitely their favorite toy. I'm gonna have to send some along with them whenever they go to their forever home!

(and we don't really play with them all at once like this, it was just for the pic. But they killed the one we did play with in 20 minutes flat.)

Cribbage is getting really good at coming up on the bed while I'm lying down. Sometimes she even follows the little command to come on up and hang out with me and Fiddle. 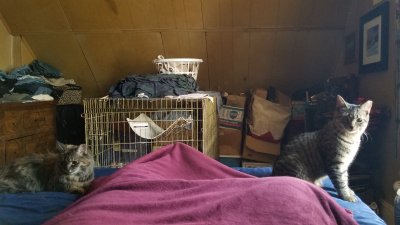 The bebes loooooove their wet food.

So...
Boyfie visited for a couple days and I was afraid it would freak Cribbage out and possibly set back her socializing a bit, but she stayed right around us.
He didn't get to actually touch her, but she did play with him (peacock feathers!) and she got pretty close to his hands for sniffs.

I've been letting them out into the living room more and more.
My boy Alasdair still gives a few hisses and growls, Tallulah for the most part just ignores them. Tallulah lightly bopped Cribbage on the head once during mutual play time, and Alasdair did the same to Fiddle.
Geneva hangs out in the bathroom (door open) because she hates Alasdair so she isn't even aware there are kittens here.

Tonite they're exploring the cat tree for the first time. I can't get a great pic because they won't stay still haha! 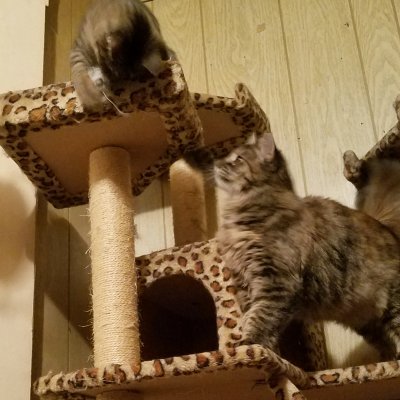 Cribbage is making amazing progress. I really hope someone adopts them both together!

Lari said:
Cribbage is making amazing progress. I really hope someone adopts them both together!
Click to expand...

Yep, I'm not gonna let them be separated. And the kitten coordinator is on board with my request. When Cribbage is ready, they'll be available only as a bonded pair.

My good boi Alasdair and my foster friend Fiddle are now chasing each other around making cute playful chirpy noises WITHOUT any growls or hisses. 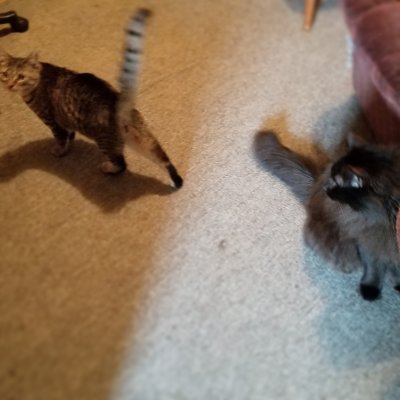