I hate using flea medicine. I am very aware of the risks and have anxiety every time I'm forced to use it. I live in the country and have outdoor pets that bring fleas inside. It feels like literally nothing can get rid of the fleas except for the pestisides - if I could compare I'd say natural flea medicine is like a bb gun and the prescription is like a machine gun. That was why this year we had a flea problem and one of my indoor cats is very allergic and sensitive to fleas. So much so she ended up getting anemic with the pale gums, fast breathing, no energy, and started sleeping in her litterbox. It was very scary so we had no choice but to give her a dose of catego. The fleas all died but a week later she developed hot spots all over her back. Idk if the hot spots were from chewing her skin from the fleas or if it was an adverse reaction from the medicine that caused her to chew her skin. Fortunately, after a few weeks her blood count went back to normal, the hotspots healed, and she made a full recovery. Its safe to say I won't be using catego again just incase that's what caused the hotspots but I just know if I don't use some kind of preventative at least until winter we'll be right back at square one with the fleas and I won't let my baby get anemic again. I'm very much aware and scared of the risks but I just don't think I have a choice in this matter. It's like I have to choose the lesser of the two evils when I'm just trying to do what's best

analyzing the risks and benefits - either not use the medicine and get anemic or even possibly die of flea anemia, or at the very least be dreadfully itchy and uncomfortable, or use the medicine and get rid of the parasites but possibly have an adverse reaction. Why do those medicines have to be such a blessing and a curse... look at that chart of adverse reactions and deaths and tell me you wouldn't blame me for being hesitant. I need some reassurance bc their next dose is due tomorrow 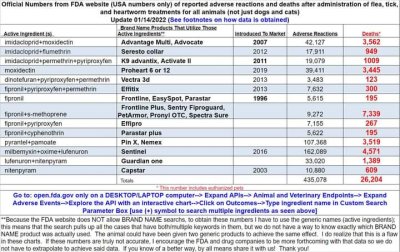 Seventy thousand is still a lot of adverse reactions, granted but there's still one critical piece of information missing: How many pets were SUCCESSFULLY treated with these drugs? It doesn't say. Consider that, in a given year, there may have been tens of millions of animals treated with these drugs. If 70,000 out of 1 million got sick, that comes out to an average of 7%.

Further, the chart doesn't say what is considered to be an "adverse reaction." What if a drug made an animal vomit or get diarrhea? Is that considered adverse? How many got sick enough to require medical treatment? How many, out of those, required advanced treatment?

Take the total number of animals that were treated over the span of 24 years, only a small percentage of them got sick and, out of that, an even smaller percentage died.

It's pretty clear that this chart was designed to scare you in order to push somebody else's agenda and they are using flimsy statistics to bolster their claim.

I think you should talk to your vet and show them this chart and ask them what their opinion is. Tell them exactly what you expressed, here, and ask them to help you decide which medicine to use.

My favorite meaningless statistic: "Fifty percent of all Americans make up exactly half the population of this country!"
S

I have completely been able to get rid of fleas for good in two places where I live. Yes, Bravecto is included successfully with our six cats and four dogs. They all have to be treated at once so it is expensive. The three-month dose is necessary. Then if you have hard floors vacuum first and then bleach them. If you have carpets vacuum and use a carpet cleaning machine and then vacuum again and throw out the bag/container immediately. I used the type that goes on the back of their neck, not the pills. We have three cats with severe flea allergies and flea bombs only bring on more baby fleas because they cause humidity to hatch them. So I hope that you are able to help your animals to be comforted again.

I didn't see Advantage II in your charts (Imidacloprid & Pyriproxifen/IGR-flea sterilizer). I believe it is probably one of the 'safest' of flea treatments. But it only addresses fleas, in all stages. So, if you need something to cover ticks or other parasites, it wouldn't be the most appropriate for you. I have used Adv II on Feeby (18+ yo) for a while now with no adverse reactions; I also used it on two previous cats. It is also one of the few products left that don't enter the bloodstream, which I would imagine can attribute to more adverse reactions.

The Frontline products also do not enter the bloodstream, so it might be another one you could consider. But the only things besides fleas that they cover is ticks and lice.

Neither of these require a prescription either.

I think it is pretty much impossible to successfully battle fleas without using one the pesticides - especially with cats that spend time outdoors.
S

My daughter's cat got sick from Advantage ll. All I can say is that every cat will react differently to medications and insecticides. No two are the same. Any animal may be allergic to anything they try.
P

I rlly appreciate everyone's advice. All of my other kitties are going to stay on their usual catego bc they've been fortunate to never have a reaction. For my sensitive bby I dont wanna chance the catego again incase thats what caused her hot spots so the next time I can get a ride to town I think I'm gonna return the revolution plus I bought and just go with regular revolution. Revolution plus uses sarolaner which is a member of the isoxazoline class which is know to be neurotoxic. This class has been associated with neurologic adverse reactions including tremors, ataxia, and seizures. I had a cat that had siezures and other neurological problems. Sadly she passed away in 2017. I never wanna see another animal go through that ever again. I wish I would've just bought the regular revolution to begin with bc I've used it before with no side effects but I didn't think my clinic sold it when I went there the other day but then I checked their website this morning and it turns out they do

revolution, revolution plus, and catego are the only flea medicines for cats that my local low cost clinic carries. I'm poor and my car is shitty so I don't know the next time I can get to town but I'm going to try to get there monday when they open. I'd rather wait a few days and get the right medicine than play russian roulette with my baby. I understand all medicines have risks and benefits but from what I've researched and from my own personal experience I feel that the regular revolution will be the safest option with the least risks. I just wish my dumb ass would've checked their website before I went in the first place gosh

I have a previous post for context. So I just got back from my local low cost clinic to exchange the revolution plus for regular revolution and they told me they don't sell it anymore. Even though it says they do on their website

... Anyways now I pretty much have to use revolution plus on my sensitive baby punky. There is a literally black box warning about the neurological adverse reactions that isoxazoline class medicines can cause right on the insert. Yall I'm scared. Someone say something to reassure me. Idk if I can bring myself to put it on her. Punky is my little survivor kitty and she is so sensitive to literally everything. I rescued her when she was 6 weeks old under my trailer and nursed her back to health. She was malnourished and dehydrated and skin and bones. Maybe thats why shes so sensitive. Some may think that I saved her, but she saved me. Should I just put the medicine on the others and give punky flea baths instead? I love her so much and just want to do whats best for her. Someone pls help. Just look at that pretty kitty I love her so much

Advantage 2 is an older generation flea medicine that doesn't require a vet prescription and doesn't have the same risks as the newer medicines.

Do you currently have fleas or is this just protection? If you don't currently have a flea infestation, you can preventatively treat your carpets and upholstery with something like Fleabusters or Precor. Fleabusters produces a lot of dust. Wear a good dust mask and keep animals out of the room while applying the treatment. This is backup in case the Advantage 2 proves to be less effective than the Revolution Plus. If you have an active infestation, you'll need more than a topical medicine anyway.

This is perhaps the most thorough site for eliminating an active infestation and also understanding the differences between the different kinds of treatments.
FleaScience
P

Thank you for your advice! It's crazy to believe that eggs, larvae, and pupae make up 95% of the total flea population in the house and the actual fleas only make up 5%. So treating the house is kinda more important in a way. But treating the animal is still vital! I found another low cost clinic that carries prescription flea medicine without isoxazoline drugs one town away its not that far. If that falls through I might just get capstar and give her flea baths until the fleas are gone. I'm a broke bitch thats why everythings such a struggle :/ Here's another study I found about isoxazoline: https://onlinelibrary.wiley.com/doi...b1dVEzLAKDWI6YFRQC_mTZdblDY4I9mBglqoeOKaUjhPg
You must log in or register to reply here.
Share:
Facebook Twitter Reddit Pinterest Tumblr WhatsApp Email Link