Three months ago I took in an extremely timid feral female of around three years old. She got spayed, got her vaccines, worm meds and an all-round checkup. She would hide wherever she could as I slowly blocked off all the unders from our apartment, leaving some more accessible hiding spots. At first I did pet her but decided to stop because she was clearly terrified and very stressed out from me touching her. Later on, she would bite, scratch and hiss if I got close with my hands.

A couple months in, we were already playing a lot daily and she wasn't hiding away anymore, instead sleeping on the cat tree and hanging out on the carpet. I started scratching her head with a feather stick and slowly she got the jist of it and started to even push against the toy and roll on the floor! Over time I kept scratching her, moving my hand up the wand slowly. Sometimes I would sneakily brush her head with my hand. Now for about a week, I've been able to scratch her head and stroke her back and she loves it! Her tail shoots up, she has a funny little purr and she pushes against my hand to get the best spots scratched. Every morning she gets excited about her breakfast and follows me around while I prepare it.

Just thought to write a bit of an update here to encourage people to care for ferals and give them a chance as indoor cats. Sade here has made great progress in only three months despite being an extremely timid adult feral from a population and having no human contact prior. She seems like a really happy cat now, playing and eating and napping a lot. 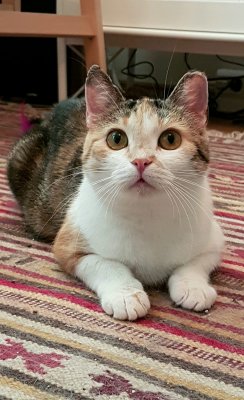