Feral Kitty Loose In My Cabin

Shadow is back in his original room with the cage but not IN the cage. Is there any benefit in trying to get him back in the cage. We had made a lot of progress while he was in there and he does seem ok with it but ....

The cage can be a great safe haven. Can you see if meals can happen there? I let my kitties keep their cage as a place to play, relax and eat treats in case I ever need to confine them. Maybe you can get back to the level of closeness you had just by using it as a happy place. If you can gain the level of trust with him in the room, that’s fine. If you feel he will only be manageable in the cage for now you can re cage him. Sometimes it’s a little hard to go back but it could be the tool you need if you can’t get to the same level from where he is now. He hasn’t been confined to the room long. If you have time to devote, then I would try in the room for a little while. Shadow is so smart, he may not want to use the cage as a safe haven. Lol

Oh he's a smart one! I went out of the room for a couple of minutes and he's eaten all the treats and back to hiding! I really miss his little head butts and pretend bites!

Lol he's come back out to take his toys under the bed! Gotta love this monkey even though he is giving me this fight!

They know exactly what they are doing! Lol He is taking full advantage of being loose but he’s going to come around eventually. He’s going to crave that affection and contact too.
Took his toys under the bed?!?!?

Oh, he is a sly one. Playing cat and mouse with you! Shadow really has led you on a merry chase! I have to imagine that this is all a great game to him. Do you ever get the feeling that they are under the furniture smiling as we crawl around on the floor begging them to come out?

I could show you some very naughty kitty faces! I had one Mom cat vanish even though her four week old babies were crying for her. I was so worried about her but she was just hiding from the chaos of five babies. One of her babies got her back though by hiding from her. I’m going to send you a laugh in a PM.

My hubby spent last night in the room with Shadow and stayed awake most of the night. In the middle of the night Shadow started meowing. He got Shadow out to play and was giving him some treats by hand but he also got a good bite on his finger in the process. I hope that will be ok. I have had a few bites from the little guy and have been ok so far. Since then Shadow has remained true to his name and is just a shadow. I have been in the room many times today and he can sneak out minutes after I leave for food and litter box without a sound. Hubby is sleeping in the room again tonight so we'll see what happens.

Ouch! Yeah, watch those bites. Just clean them very well and watch for any redness that seems to spread upwards from the bite.
If you offer the treats, hold your hand fully open and place the treat in the flattened area of the palm. I know cats like for you to hold the treat out but... watch those accidental nips. Shadow probably senses he bit and hurt. They never really mean to hurt and often retreat after doing so. When your husband sleeps in there again tonight then Shadow should figure out that everything is okay. That’s a dry good way to reassure him.
Quiet as a Shadow? The name really fits! 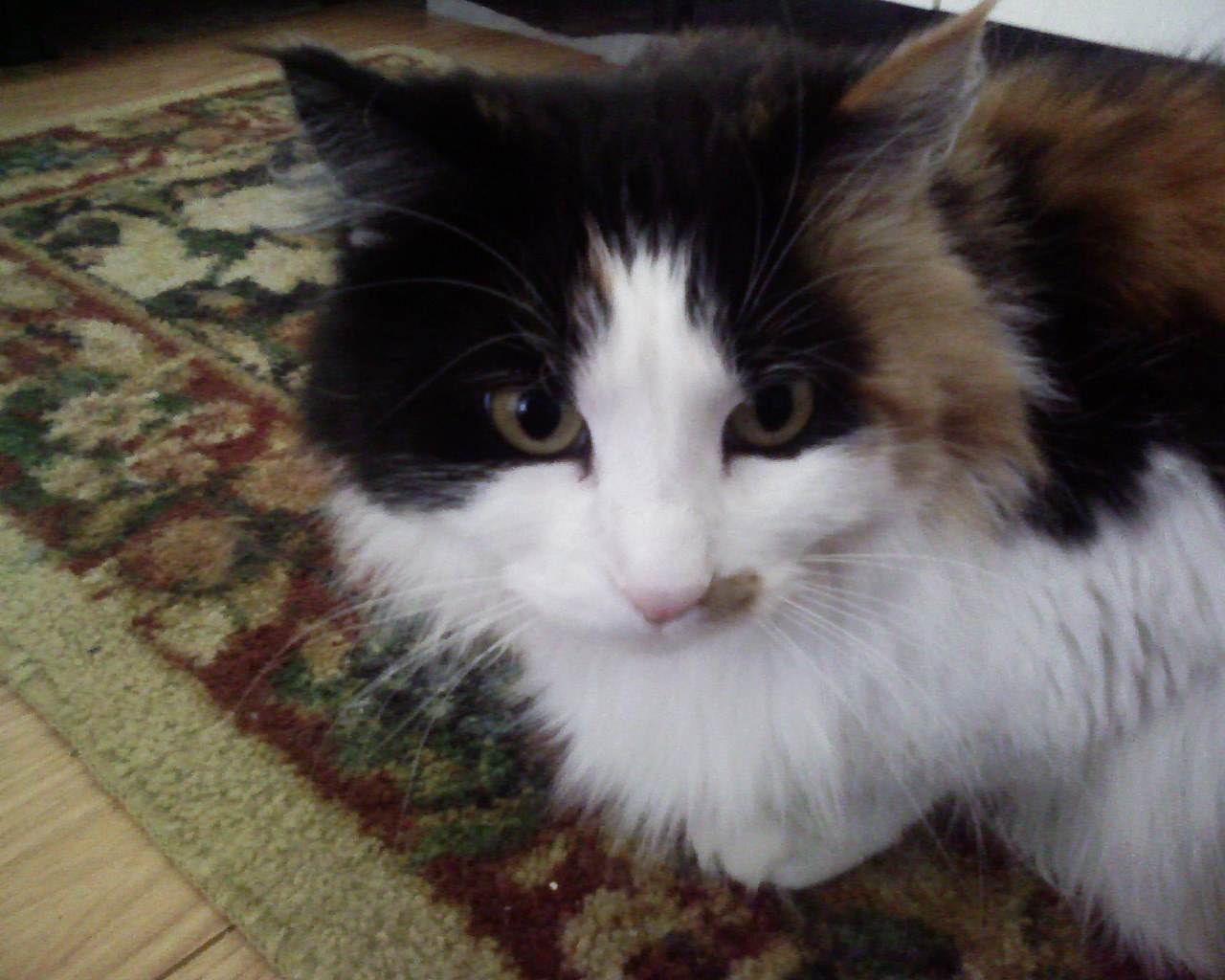 This last picture is my Kiki who was the kitty love of my life. I got her at 3 or 4 years old at the spca with a fluffy but broken kinky tail that was so cute. Oh I shouldn't be like that I have had many cats who I've loved too much!

I knew that must be Kiki. We all find special bonds but we love them all. Shadow is already in your heart too.

He is so the next big love!

I kind of knew that too. I’m not there and I already love him too!

They put paw prints on our hearts.

Three months ago feral Shadow became an inside kitty, 1 month since his neuter when the vet said he's about a year old. He's in his cage right now and I want to pick him up and let him out but it's a bit difficult. He freaks and bit my hand but not hard enough to break skin. Havent had a real bite or scratch for at least a couple of weeks, yay! He really aggressively head butts and seems to desperately want love. Is this crazy hope or really possible? I hope the room is better prepared than the last time so he will stay there for a while.

He is head butting so you are well on your way! Not only possible, probable.Leather gloves, thick coat or two long sleeved shirts and you may be able to handle him with no biting at all. Try petting him inside the cage and putting one hand under his tummy to get him used to it being placed there. Make this brief at first. Next stage, start by lifting up slightly. Next stage lift and pull him closer to you. Next try lifting him onto your lap.
The other way I would work with him is to block off hiding places and let him out of the cage. Give him one hiding place in the cage like a carrier. Or cover the cage to make that his hiding place. They usually retreat to whatever hiding place is available and if it is the cage, you have some control over working with him further. Sending you PM with photos of the stages.

I had nearly the EXACT same thing happen to me 3 years ago, almost to the day (I think it was early May when it happened to me - it's in my post history somewhere).

I had been moving a small colony of ferals, and until accommodations were fully completed, they stayed in large dog crates.

Well. one of those kitties was an apparent escape artist, who was and is absolutely opposed in confinement (he had beat his face up BAD when we trapped him - and any time we have him in his carrier for the vet, he ends up with a bruised and bloody nose, even though the vet isn't even 5 minutes away).

To this day, I have no idea how he got out of that wire crate and it haunts me lol. It seems impossible, we even had it reinforced with zip ties everywhere.

But, he did... and the room was my work-in-progress work room and storage room for refurnishing furniture and things... i.e. NOT cat-proof whatsoever.

I worked with him all summer, and at some point during the fall, he became an official house kitty.

Yet this little feral that escaped his way into my heart three years ago, is the most affectionate of them all. He doesn't do well with other cats, so he is or bedroom cat (full time until more recently, now we alternate, but it's mostly his room). We love having him in there because he is the biggest cuddle bug, and so, so sweet. There is definitely hope

As a bonus, I took in another feral and her kitten this past May as well. Kitten was easy to tame, Momma took a little work. But she's officially way more affectionate than our one mostly non-affectionate, slightly skittish cat.

Her progress plateaued for a bit, but she's still coming around and really wants to be a cuddly lap kitty. If I lay on the bed in their room, she will lay right up next to me now

Keep at it, he'll come around. Maybe not exactly in the way you want, but just give it more time

Today has been an interesting day with with Shadow! He was meowing this morning desperate for me to come to him, aggressively head-butting again and loving and then biting but he still didn't break skin so maybe he's learning? I tried picking him up and to take him out of the cage and he did scratch me a little. Then he went down to check out his hiding spot under the bed and found it was blocked off, found a new spot behind his cage, stayed there for a few minutes and then came and grabbed a treat (piece of chicken) and ran back into his cage. Throughout the day I've visited him and he's been really excited to see me. Tonight at dinner again quite hyper and excited. He was rolling around on his back exposing his tummy so hope that's a good sign. He's clumsy at times and stepped into the hole to the lower level of his cage and steps in his food dish. The noise from the dogs hasn't bothered him too much today. They get noisy at times and are pretty interested about what's in the room. I think if he's going to come out of the cage it would be at night. I had hoped to get him out this time when I was here. I'm not sure if I want to leave the cage open tonight for him or not. He just bit me again while purring. Wow he just bit my lip. I guess that's it for tonight. He's still rolling around happy and purring.

Ok there's no pain the lip bite now so should be ok right?

I never thought with any of my previous cats that they could give me a terrible infection, but they never bit me. I even had a stray/feral that came in to me before with no biting. This is new to me.

Is the bite bad? Clean it well and watch it. My doc finally gave me some antibiotic ointment to keep on hand after learning I was working with so many kitties. Lol The thing to watch for is if redness starts traveling away from the bite. That would be the sign to go in to the doc. You could let your doc know about the bites to see if they want to give you any preventative.

It sounds like he is doing kitty version of affection nips. Just keep correcting him about it. Young kitties learn from Mom and if the education is cut short, we have to teach them.
Exposing his tummy is normally a sign of trust. That is exposing his tender spots. They can use hind feet to kick but he is already affectionate with you. He is still nervous and excitable- stepping in food dish- but if he is retreating to the cage as a safe spot, it’s going to be much easier to work on everything.
You must log in or register to reply here.
Share:
Facebook Twitter Reddit Pinterest Tumblr WhatsApp Email Link