Zuko had lost his left eye before we got him, and last month he was finally old enough to have the eye socket surgically closed. His eye healed up great and has been fully healed for a while now, but the last few days I thought I had noticed swelling, and today I am sure his face around the closed eye socket is swollen.

Is this normal? Or expected? I am planning on calling the vet in the morning, but if anyone has any info please let me know if I’m over reacting!

I’m adding several photos from different perspectives so you can compare! Hi. Sorry no one has responded yet, and I can't give you any type of answer due to my lack of experience with anything like this. But I think your best bet is to contact the vet and ask them. This is one of those times I feel the old adage of 'better safe than sorry' applies.

Please let us know what happens!

FeebysOwner said:
Hi. Sorry no one has responded yet, and I can't give you any type of answer due to my lack of experience with anything like this. But I think your best bet is to contact the vet and ask them. This is one of those times I feel the old adage of 'better safe than sorry' applies.

Please let us know what happens!
Click to expand...

Thank you for your reply!

I wasn’t sure if anyone would know since this is such a specific problem, but I thought I would reach out just in case! I was having a hard time finding anything through google either. Most of what I saw was about immediate post-op issues, not a month later.

I will definitely update the thread as I learn more! if nothing else maybe someone else will find it in the future and it can help them!

Dropped Zuko off at the vet this morning, his eye definitely looks even more swollen today. 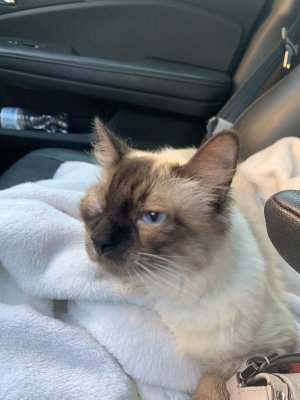 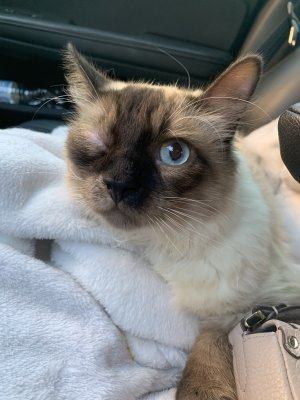 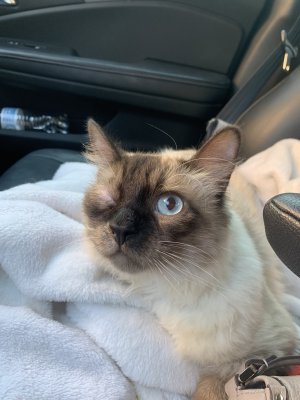 The vet checked him out and pulled some fluid with a syringe. The fluid was clear (no pus or blood) but the cytology showed some bacteria. So they think some kind of infection? It could have been something in eye before it healed and is just now popping up or something that entered through his nose and then got trapped there.

He was given an antibiotic shot and were monitoring for now to make sure it goes down. Fingers crossed!!

The vet checked him out and pulled some fluid with a syringe. The fluid was clear (no pus or blood) but the cytology showed some bacteria. So they think some kind of infection? It could have been something in eye before it healed and is just now popping up or something that entered through his nose and then got trapped there.

He was given an antibiotic shot and were monitoring for now to make sure it goes down. Fingers crossed!!

How is Zuko doing? I hope his eye looks and feels better! His eye is much less swollen today! There is still a bit of puff, but nothing like before!! It was much less puffy post vet visit as they pulled a cc of fluid out. So I’m hoping that this means we will continue to maintain at least (see a reduction at best!!)

but he’s not stopped playing or terrorizing his sister, and he’s still eating well. He didn’t have a fever either so that is a good sign that this isn’t too bad and we can hopefully kick it quick! Aw, what a cute and sweet baby! I hope Zuko's eye heals up nicely from now on and he lives his best life as a winky cat!

I am so glad he is recovering; he is adorable and those tiny baby pics in the other thread are so touching. He is clearly lucky to have you.

(Not so) Quick update:

Zuko had his check up appointment yesterday (2 weeks from his initial visit) and he eye had slowly re-swollen during that time. By the time of his checkup, his eye was back to the size when we initially brought him in, and that morning has started to show some reddening/petechiae on the scar.

Both the vet on call that day, and our usual vet who performed the surgery saw him (he was in a surgery when we got there initially and joined when he was done). They both felt that it could still be a part of the healing process, and although it was swollen and bulging, the skin was not yet tight (there was still a soft/squishiness when you touched the swollen area) and there were no signs yet that the scar was at risk of opening. Combined with the fact that he does not seem to be in pain, allows us to touch that area, and does not mess with it or rub it himself. He is also behaving, eating and drinking like normal, so they are not yet concerned.

They felt if it was caused by his glands or ducts continuing to leak into the socket, it would have swollen much faster, in days rather than weeks. There is no sign of infection or blood, so for now we are monitoring and waiting another two weeks (with another shot of antibiotics to make sure nothing develops in there). Depending on wether it has continued to swell or reduced or leveled out will determine our next steps. If we notice him getting worse, or the skin becoming tight we will bring him in sooner.

It is normal for wounds to fill with fluid when there is “dead space” as part of the healing process. And if it is all normal, then the swelling will level out when the pressure becomes too great. (If it were a gland issue or a bleed the pressure would not be enough to stop the fluid and it would continue to swell). Normally a tube would be used to drain fluids from a dead space so sutures and tissues can stay together for the healing process, but with an eye surgury, it’s way too close to the brain to leave a drainage area, it must be fully closed up.

The hope is, if this is normal healing, the fluid will fill the dead space, but the pressure will stop it before it gets to a dangerous point, and then the eye tissues will heal up and the swelling will eventually go back down. more concerned with his sisters eyes

While none of us here are eye surgeons, what you have posted makes sense. Both doctors looked at it and agreed that there is positive progress with no pain. Yes, it means you have to keep watching this, but hopefully Zuko has rounded a corner.

What a sweet nurse puppy! Please keep us posted.
W

Zuko and his dog friend are so sweet! I am glad the eye socket isn't bothering Zuko even if it's alarming to humans! I hope this eye socket heals up soon. Zuko is still super cute!

Thank you for the update as well as the good explanation. My vet leaves a corner of the eye open when she does enucleation but closing it up because of the risk of infection makes complete sense; after my daughter's sarcoma surgery, the dead space swelled hugely and they installed a drain tube but, as you said, the close proximity of the eye to the brain creates a dangerous risk for Zuko. The photos of Zuko and his pup are precious

Thanks everyone for the support and lovely posts! I know I had hard time finding information when it first happened, and was very worried not knowing what could be wrong! So I will continue to post updates and try to give lots of info and hopefully this can help others with similar issues! His eye was drained again. All the liquid was clear with nothing (cells, bacteria, etc.) in it! So that’s a good sign. The vet didn’t think it looked any bigger than when he left the last time (another good sign it’s not continuing to swell). So, it’s another 2 week wait to see if/and how long it takes to refill with fluid. Because Zuko’s socket was already empty when the enucleation surgery was done, the vet said you kind of have to do a best guess as to where things are as far as ducts go, he still feels confident he didn’t miss anything but said it is possible. He is very hesitant to do another surgery however because even if something was missed, he would have to create an even bigger hole with the second surgery to be sure everything was scraped out, and it would be extremely invasive. He also mentioned other cases he knew where the pet was brought in just twice a year for the socket to be drained, and that could be a less invasive option. So again, we are just playing the waiting game

Side note, our big boy went from 10.9 to 11.2lbs the past 2 weeks! And I was actually concerned because he was feeling slimmer/bonier that he’d lost weight! I guess he had actually just grown

He’s about 9.5 mo but no sign of slowing down on growing! I think he’s trying to get to Brady’s size!!