Does anyone have any litter box suggestions for this kind of problem?

So Jackie is kinda an idiot. He likes to pee in one box, then poop in the other. In his excitement/eagerness he doesn’t cover his pee or something. When he climbs over the side of one box, into the other he steps into his pee litter puddle and gets clumping litter stuck all over his back paw(s).

Which makes a mess and is awful cleaning up the litter off his paws!

I removed his 2 high sided littter boxes and gave him a large tub. Problem solved but I wanted to give him 2 boxes (in case I have an awful sick day, he can skip one day of box cleaning if absolutely necessary.) So I gave him back one of his small boxes. He then climbed the side of his tub into his litter box!

So I added a lid wall.

So I may DIY & cut a entry whole in the side of the tub (& sand it? So it won’t hurt him?) if I do that I will look for a second large tub with a smooth bottom for him. (He is a litter kicker so it must be high sided.) The scratching sofa is there temporarily as a step to make it easier for him to get in & out. 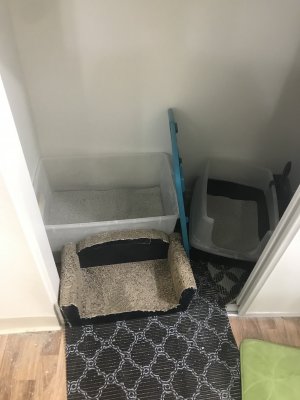 I could give him back his two smaller boxes with the “wall” between them.

Does anyone have any other ideas on a better box? Should I look for an extra long, extra deep tub so it is just a giant litter box?

The cute little twerp that is lucky I love him to pieces: 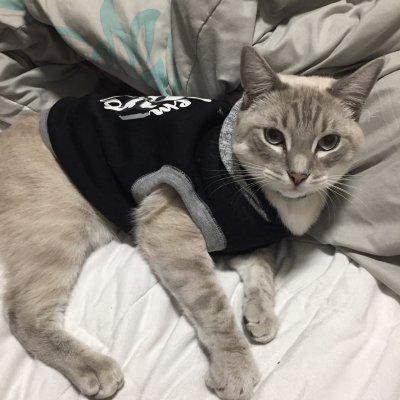 Be happy he only steps in pee. Captain Jack, as adorable as he is, didn't get his nickname of Captain poopy-paws for nothing. Have you tried the "top entry" litter boxes? I've found that Jack likes to use the corner of the top entry, which leaves his path through the lid clean.
Top Entry Litter Boxes
There are also litter mats that help clean paws when they walk on them.
Good luck to you and Captain pee-paws!

at the name Captain Poopy paws

Ummmmm a mat won’t do at all. When he steps in pee he gets it from his toes all the way to his ankle!

The top entry is a maybe. I have noticed they look kinda small.... especially for the price! Plus I wanted to avoid lidded boxes. (Cats seem to prefer open & I may add another cat some day.) I may have to buy a lidded box or cut a circle in the tub’s lid so he enters from the top...... to see if he likes it.

Hey, I've actually just posted a video on ltiterbox tips & tricks that may be helpful, just because I can see a few issues in the photo that would be covered in my video (nothing major, just common issues I see all the time really that are easy to fix!). It's pretty in depth but hopefully will help you understand Jackie and his toiletting a little better (he's absolutely gorgeous btw!!). I'm totally new to youtube but recently qualified in behaviour/psychology, anxiety and first aid for felines, so while the graphics and presentation may not be great, the info within is up to date and accurate

For starters, most cats prefer using one box to pee and another to poop, so he's not alone there haha! It's really common. Another thing to consider is the placement, your boxes should be spaced out and ,this way, he wont step from one to another and get litter-paws! But ideally space those trays

The spacing is tricky unless I remove the closet doors plus it is right by the sink. I want his boxes to be easy to clean. I think the “wall” is staying between the boxes!

(keeping the litter in the bathroom is preferred over having him spread it all over the carpet.) He seemed to prefer two boxes again, so I gave him back one of his original boxes. It is a large handicap assessable bathroom but space is limited in my 1 bedroom apartment.

Thank you for saying he is adorable!

I personally use ‘Breeze‘ by Tidy Cats. It’s a pellet system when they pee it doesn’t sit on top. I guess they repel moisture (mine usually are just semi wet but no puddle) and it goes through a grate to a pad at the bottom. Ive been using this for years. Their poops are easier to clean as well. I didn’t have to transition my cat, but some don’t like it. I would also try putting the openings of the litter box together then he can’t climb.

He did step in his pee a few times. I had to wipe down his paws. I think that stopped him from doing so.. he hated me doing that..

Now I have Geoffrey. I only have room in my tiny apartment for one litter box.. I have an extra large high sided one. G is a kicker.. litter everywhere, and it gets caught in his claws.. he is a crazy cat... He also steps in his poop... unbelievable ... one end of the box for pee, the other for poop... he is a bit cat, so he could use a large tub for a box, but I would not have any floor space in my tiny bathroom...