Do You Know Your Cats' History?

I love that name "Sirvester"! I call a friendly stray I'm feeding, who i'm planning on fixing and rescuing, "Sir Meows-a-Lot", because, well, he meows a lot. But it's "Sir" for short.

ezwriter said:
I love that name "Sirvester"! I call a friendly stray I'm feeding, who i'm planning on fixing and rescuing, "Sir Meows-a-Lot", because, well, he meows a lot. But it's "Sir" for short.
Click to expand...

Thanks! It's actually a mix of two names...Sylvester and Survivor. But Sir for short, because he's a gentleman! 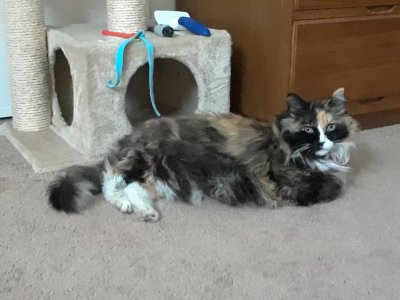 Lulu's original owners found her as a pregnant young stray and had her for eight years. About three years ago I saw her in the neighbor's yard and luckily she had an i.d. tag. She lived two streets away, one being a very busy road that she had to cross. Being a cat lover I brought her inside and gave her some tuna which she absolutely loved. Well, need I say more? After a quick snack I took her to her owners who told me her story and said that she would rather be outdoors than inside.
The next afternoon, guess who was on my front porch? And the next afternoon again? I never gave her tuna again but she kept coming back. After a couple of weeks of this happening her owners agreed to let her stay with me... and three years later she's still here! Thank you for letting Lulu into my life!!!
Last edited: Sep 22, 2019

Many years ago there was a feral tom that was living in my yard. I was working on socializing him and making good progress. Then one day he brought to me a little tortoiseshell. (He actually introduced us, which was pretty amazing) By her size, I judged her to be a kitten - perhaps 8 months old. I began feeding her and boy was she ravenous! She was terrified of everything and the closest I could get to her was about 15 feet. She stayed hidden under our shrubs, but would come out when I put out food. I was so worried about this little kitten getting pregnant, and so immediately began trying to trap her. She was so cautious that it took several weeks, but I finally caught her. Off to the vet we went. I was surprised to find out that she wasn't a kitten, just a really small cat, approximately 5 years old...and she was pregnant. They estimated she would give birth in about 3 weeks. The vet's office told me they would help find homes for the kittens, so I took her home to wait out the pregnancy.
She stayed hidden in the house most of the time, but would still come out to eat. As the weeks passed I began seeing her out in the open more often, timidly exploring. Unfortunately, when she went into labor there were complications. She had to have a C-section. She made it through the surgery as well as her 3 baby girls.
I don't know what happened, but after she had her babies, she began to trust me. She would allow me to give her a few quick pets. She wasn't hiding anymore. She would only leave her kittens when I was sitting with them to babysit. As the weeks passed, I was able to give her more affection. It seemed so miraculous to me.
On subsequent vet visits I learned a few more things about mama (now named Jasmine ). Her outdoor life had not been a pleasant one. She has a couple of bb pellets imbedded in her that the doctor felt were too risky to remove at this point. She also suffered a fractured jaw that didn't heal correctly. And she is terrified of enclosed spaces. Even closing the bedroom door can send her into a panic. Putting her into a carrier results in claws being ripped out in her frantic attempts to escape. I assume someone did something terrible to her while she was restrained in the years before she came into our life.
We have had her for 10 years now. She is the sweetest, most loving, and gentle cat. She is adored and pampered like she should be. I have no doubt that she knows she is loved.
BTW We couldn't part with her kittens, so we kept them as well. And the feral tom who brought her to us was made a housecat also. He passed away a few months ago, but he lived his last 9 years as a happy lapcat.
Q

I wish I could know more about my cats' histories. 2 are sisters from the ASPCA. I adopted them at 6 months old. There was no background info on them other than their date of birth. I do wonder how they had their exact date of birth but no other information or even information about their personalities.

My third one was rescued by a local group. They were going to TNR him until it turned out he was a very sweet guy who had some familiarity with humans so they found a foster--me! We ended up keeping him. There is some speculation that he might have been abused. He was un-neutered, very skittish (and still is), and seemed fearful when anyone raised their hand, like he thought he would get hit. I also wonder if he used to get kicked as he gets nervous if people put their feet near him or wear shoes around him. He also hisses and runs away after any of us have had a drink - seems like he does not like the smell of alcohol. Nevertheless he's shown a lot of improvement over the year we've had him and definitely more trusting of us. We love him to bits.

That's a cool story, weebeastie. You had an entire cat family! I like this thread idea it's cool to read different cat stories.

I don't know anything about Grey Cat's first 1-2 years, but I have a good guess. There was a family that used to feed a lot of feral/outdoor cats and get them fixed. They never let them in (exept for a few) but would feed them from the porch. Eventually they moved though. When I lived with my parents their cat Kitty would always be on the back porch, and this big grey cat started hanging out with her all the time. He was always there and we would say "Hey it's the grey cat!" and that's how Grey Cat stuck... there were efforts at calling him something else but none took. He was always trying to get into garbage. Then he started coming in the window we left open for Kitty and getting into garbage. So we just let him come in and he became our cat. He was fixed and the vet said he was about 2 years old, in 2011. We aren't sure but think he came from the porch house after they moved and that's why he looked for food on our porch when he saw Kitty hanging out there. We never forced him to stay, and he could come and go, but eventually he barely wanted to go outside. He was an adorable purr monster lap cat and I quickly became his favorite. He wouldn't let Kitty in my room. Then after I had moved out and my little brother was having Asthma attacks from him (they moved into a small apartment- seemed to bother him a lot more there) I adopted him as my cat- SO HAPPY! And the rest is history.

Noodle I know nothing about her history, not even a hunch. Just that she was dropped off with her siblings at the shelter at 6 mo. old and they were all undersocialized, some more hissy than most. Now she is extremely friendly and not shy at all..... all she wants to do is play.

Not in detail. Cali, now 2 YO was adopted from a foster home run by a woman who rescues kittens from kill shelters and adopts them out.
Oliver, 7 1/2 months old was adopted from a rescue organization. When I inquired about Oliver's background, the woman just shrugged her shoulders and said people bring cats off the street all the time.
You must log in or register to reply here.
Share:
Facebook Twitter Reddit Pinterest Tumblr WhatsApp Email Link