I’m looking for suggestions for cat safe products or methods to heal scabs and sores on my cat’s neck and chin. A couple weeks ago, I noticed her collar had tightened so I took it off to loosen it and saw 2 sores on the left side where the collar had rubbed it raw. I feel really bad about that because I always put their collars on loose enough to pull on/off over their head without unclasping the collar. It tightened after she’d been wearing it awhile, but I should have noticed sooner.
I left her collar off and I put Halo’s Cloud Nine balm on it for a few days. She really hates that stuff and it’s really greasy and has a slight medicated smell. It worked well before on another cat, even on her, but it didn’t seem to help these sores. It made it worse as she started scratching even more and she now has scabs and sores on her neck up to chin area, a spot between her left eye and ear, the top/back of her head, and some spots on the right side. Then I tried Auquaphor Healing Ointment because it's safe for cats. I’ve even used it on cuts my fingers where you can’t wear a band-aid and it’s great. It did soften the big scab between the eye and ear so it could flake off naturally, but now that one is more smaller ones. It helped with the spots on the top/back of her head.

She’ll be 16 in a few months, has hyperthyroidism (on meds for it), and is big groomer. My 2 boys (15 in a few months and aprox. 6) aren’t having any skin problems. I’m hoping to avoid having to take her to the vet for a steroid shot, but will if absolutely necessary. 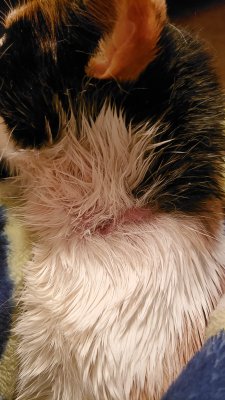 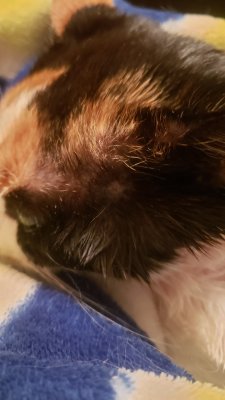 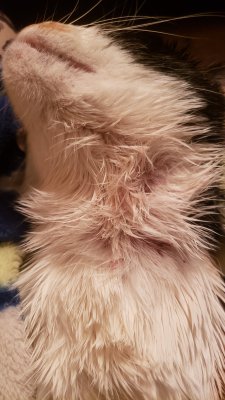 You can apply human antibiotic salve too, WITHOUT pain relievers which are toxic to cats. I get wound spray for cats at my local farm supply store like Orscheln's, Tractor supply, or order it online, and soak a cotton ball to apply it. They hate the spraying sound. Yeah, that collar was too tight, a good thing you saw it! She may have been allergic to something in it too. cat collars should be breakaway in case they ever get hung up in trees. A steroid shot will clear it up if it gets worse.
K

Maybe keep the collar off until she is fully healed. Maybe you’re aggravating her skin by putting stuff on it. Just let it be exposed to air and heal naturally.

di and bob all 3 cats have breakaway collars from the same set. The boys haven't had an issue. Usually her collars loosen instead of tighten after wearing for awhile. They're indoor only. What human antibiotic salve would you suggest? I only have Neosporin at the moment and I don't think that's safe for cats. That's really the only one I can think of.

K Kelj78 the collar has been off since I first noticed the sore. That was my thinking too, leave it off until her skin is better.
K

Location
One of the 50 great states of America.

Two of my cats had sores from collars. I took them off and not long after that, they healed.

KittyJ said:
Two of my cats had sores from collars. I took them off and not long after that, they healed.
Click to expand...

I've left the collar off, but she keeps scratching and licking the spots she can reach. And maybe I escalated the problem trying to treat it.
K

Location
One of the 50 great states of America.

Were they flea collars? Yeah, I say to just leave it be.

KittyJ said:
Were they flea collars? Yeah, I say to just leave it be.
Click to expand...

No. Regular nylon safety release collars like they always wear. It's from a 3-pack set from a brand I've bought before with no issue and the boys are wearing the other 2 collars with no issues.

She may be allergic to something in the nylon or plastic. I use Triple Antibiotic, I have used Neosporin before too. Google it, Neosporin is safe for pets. It is in a place she can't really lick anyway, so it should be OK.
Last edited: Apr 14, 2021

di and bob said:
She may be allergic to something in the nylon or plastic. I use Triple Antibiotic, I have used Neosporin before too. It is in a place she can't really lick, so it should be OK.
Click to expand...

That sounds like generic Neosporin, which is what I have from Walgreens. She can lick the neck area. And rub off the eye/ear, chin and back of head areas and lick that. That's exactly what she's done with the other 2 balms.

I also thought aloe vera wasn't safe for cats, but the hot spot, anti-itch products for cats I've come across have it as an ingredient. Maybe I'm mistaken on that. I don't know anymore.

Ingesting anything in large amounts can be toxic. Licking small amounts of Neosporin off a wound would not be toxic. As long as any wound product says it is safe for cats, it should be. If you Google it for reviews that is a good idea. I get wound spray and anti itch for cats at Orschelns and on Amazon. I have a cat that gets bloody sores from allergies and apply Triple Antibiotic with no pain killers ( when did they start adding those?!) a couple of times a day for two or three days and have done so for years. She gets them every few months. It seems to soothe them a little, she doesn't scratch at them so much. I have never found what she is allergic too but am leaning towards fish in her foods.

I ordered a bottle of Nutri-Vet Antimicrobial Wound Spray and have used it on her twice a day for a week and half or so now. The first couple of days I was able to spray it on the sores, but then she got really mad and I had to switch to using a cotton ball instead. It's helped the original spot on her neck where the collar rubbed, but it's been a slower process for the other areas she scratched. She's stopped scratching at herself as badly as she was, but she still does a little.