Hello Everyone. I'm really glad i came across this thread. I have just been in touch with my vet this morning as my 1yr old sav has the same bump on her nose. He said that its not an emergency, but would like to see her. We are booked in for next week on a routine app. How did everyone else cat get on? Im so worried, i lost a bengal at just 1 yr old last year to FIP, i dont think i could lose my little nina. Im worried sick. Like you have all said though, doesn't seem to bother her, she eats, plays and acts crazy and shes gaining weight. Please see the images below This looks very similar to Pepi's lump which came on when he was about 18 months! He is now nearly 3 years old and still absolutely fine (touch wood!) the lump has remained but not changes shape or size. When he went for his annual jabs a couple of months ago the vet said it is likely thickened cartilage and to not worry unless it changes size or shape.

My Juno also developed a little bump on her nose as a kitten, which I worried about after reading this thread. At her last wellness visit in September, I asked the vet about it and she said it was likely mild damage to her nose cartilage caused by the very bad URI she had as a kitten (she was born feral and was very sick when rescued, and then had another bad flare when I adopted her). I will continue to monitor but the vet didn't think it merited putting her through any testing at this point.

Hi! I am sorry everyone is going through any sort of co cern about their sweet beloved kitties. I am, however, grateful to have found this thread. I rescued Titus several months ago from the outdoors. He is roughly 10 y/o and a whopping 18 lbs!! He also has this hard bump on the bridge of his nose. No vet has seemed to think no big deal. Thanks for letting me know the possibilities and that we are not alone! He has been an outdoor at his whole life so I believed it was maybe an old injury. Now I know it could be something else and to watch. Good luck and god bless!
B

My kitten has this bump too! I just noticed it the other day so I'm not sure how long it's been there. He does snore a lot but he's not acting any differently - he has tons of energy and loves to eat. It feels not as hard as bone, it's a little bit squishy but it doesn't seem to hurt him when I poke it. Not sure when to worry but hoping his behavior will be an indicator of something being wrong
A

My former feral has had the same sort of bump in his nose. When he first came in (mid-March last year) I didn't notice it for maybe a month, and assumed it was damaged from him head butting the trap. (His temperament did a complete 180 after neutering).
He has always had a bit of a sneeze that the vet claims is allergies, and the allergy pills seem to help some. That being said, sometimes he is a bit of a loud breather (often snores/ whistles in his sleep, always loudly sniffs things through his mouth), and I feel like the bump occasionally gets more pronounced (swells). It feels hard to the touch - like bone. I'm not sure if it ends in a point - he is still a bit weirded out by my feeling it. A few months ago I wouldn't have been able to do that! I'm concerned because it affects his breathing sometimes, but can't really afford to do anything yet. (Praying I find any job soon! So frustrated!).

Please, if anyone had a biopsy of their cat's nose bump, catch us up on what was found!

AutumnBreeze said:
Please, if anyone had a biopsy of their cat's nose bump, catch us up on what was found!
Click to expand...

Hi. I would imagine a vet would recommend an x-ray and/or CT scan first, possibly followed by a rhinoscopy before a biopsy would be suggested. That could be a polyp, or damage brought on by him head butting the trap, or a number of other things. Allergy meds, such as decongestants shrink the blood vessels in the nose, promoting airflow, but I am not sure how exactly that would correlate to the bump.

Keep a log of any changes as well as pics so you have a record of what you see that you can share with a vet when you get in a position to do so financially. You really don't want to wait too long if it starts to impede his breathing too much.
A

FeebysOwner , thanks for the reply!

I've been keeping a really close eye on it and his breathing. He's probably had it about a year, although sometimes it is more pronounced (like in the picture). I'll probably have a second opinion since the first vet he saw seemed to brush everything off as allergies. That said, allergy pills daily do seem to help him with sneezing less, so they weren't entirely off.
J

Hey everyone—- same! My little tortie appeared with the exact same bump description, last summer— hard, in the center, narrows down, doesn’t bother her, healthy and active and eats too much and no sneezing etc, but of course I obsess about it and swear I see incremental growth… It showed up when she was about 14 months and I thought it was from a “bar fight” hanging outside. Then, it didn’t go away, and four months later on a long car ride, I think she banged it on her carrier because there were suddenly red spots under the surface and it was flatter… then grew back.

The vet tested for the cryptococcosis fungus and it was negative. Bye, $$. So then she did a fine needle aspiration biopsy… bye, more $$$$— but thank goodnessthat came back negative. She said it’s a sebaceous cyst, most likely-? And to watch for changes. I swear it’s getting bigger, but still doesn’t seem to bother little Cosmo, just me.

I’m glad to hear the same description from so many. My vet seemed less aware. Anyone else feel like the nose is widening as well?

photos:
With blue leash—pre-bump
Eating— when she scrunches her nose, it’s really prominent (most recent)
Carpet background— most recent
Giving me the stink eye/orange background— a few months ago, pre-testing
Harness— just because. How cute is a cat in a harness?!! 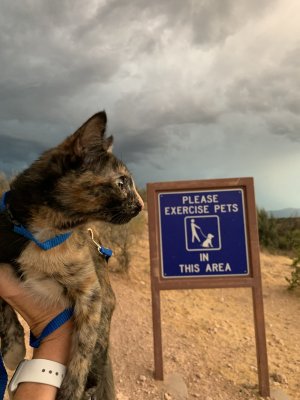 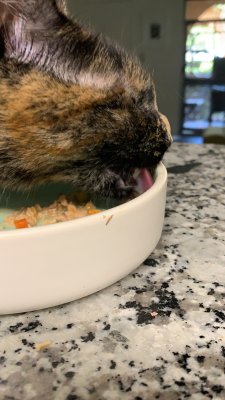 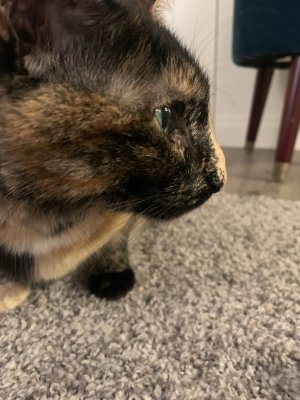 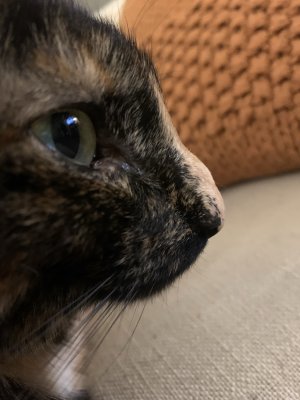 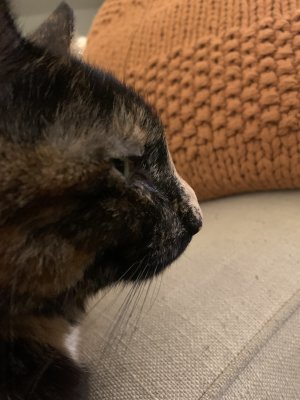 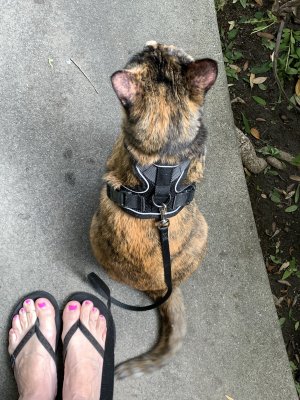 Hi. I am sorry, I don't have time to read the replies, so this may have been said already. If it was my cat, I would have him checked for a fungus called Cryptococcus. Indoor cats can get it. Cats usually pick it up from dirt or bird droppings, but I have seen many indoor cats get it as well. Often the only sign is a bump on the nose, but it can also be accompanied by upper respiratory signs. It can also affect the central nervous system in more advanced stages. It is a blood test sent out to the lab. Ask your vet about it, and if it is in your area, have your cat tested.