Can You Tell A Neutered Cat?

I tried googling but no answer as do male cats look different after being neutered. Sorry dont laugh. I always thought they looked ball-less lol.
But read the testies are soft and not hard afterward.

Yes, you can tell a difference.
M

Well that's what I thought. But he doesn't look neutered to me lol. Are you saying by looking?

This is my boy after his neutering several weeks later. The swell has gone down and the sacs are flattened and soft to the touch. tabbytom said:
This is my boy after his neutering several weeks later. The swell has gone down and the sacs are flattened and soft to the touch.

How about now?
M

Can you view my photos? Post #4. M momof3b1g said she can't view them.

Ok I see it now
M

I felt Levi's and its soft. It is just you could still the them. They aren't flat. So always wondered if it was done or done right. :/

When was he neutered? It takes several weeks after the surgery for the swell to go down and fur to grow back. After that it's flattened and soft to the touch. Flattened as in not 100% flat but with a little tiny wee bulge.

Do you have a photo of it?
M

Over a year ago. I tried to take a picture but neither him or hubby were having it.

Maybe you can try taking another photo?

If you are concerned, you may show it to vet and ask them.

Some males aren't as obvious as others. But if you feel the sack and it's soft, then he's neutered. If he had testicles in there they would feel like gummy marbles.

Generally, in order to tell if a cat has been neutered, you would check if he has visible or palpable testicles. If you feel the sack on a whole male, it's generally easy to feel the testicles inside; they'll feel like rubbery marbles. On a neutered male you'll just feel a soft sack.

Here's an example of a one year old sexually mature male, so you can see what an adult male looks like if he isn't neutered. Of course the testicles can vary in size, so it's not always as obvious as this. 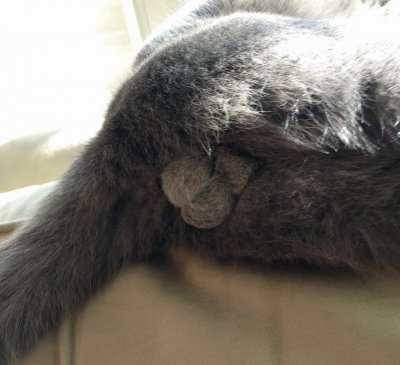 When they are neutered they get to keep their "harbl" - Internet slang... So we always called it that. The testicles are removed from their bean bag and it's stitched back up.

Stewart was my first non-neutered male, and it took me by surprise. My boyfriend had put him in the crate since he'd just come in as a stray. I went to lift him out of the crate "let's see who we have here" and I ended up groping him accidentally just right that I let out a very loud "Whoa...oops" because we didn't know each other well yet, and I clearly ended up with a palm full of testicles.