I just got the Assisi Loop for my Krista for her arthritis in her back hips. Bonus if it also helps her IBD. Though that’s pretty well managed these days. We tried GlycoFlex and cosequin. They both worked well for her joints but terrible for her butt. In the end, so to speak, the side effects weren’t worth it. I suspect Adequan would be more of the same since it appears to be a variation on the glucosamine and chondroitin theme.

I’ve only tried three Loop treatments with Krista so far. I can’t tell if it’s mildly uncomfortable like pins and needles from an area receiving better blood flow than before. Or if it’s simply, cats being cats, she’s annoyed with having this thing resting on her. I am leaning towards the latter. She will move just enough to get out from under it rather than run away from it entirely.

Any tips on how to get her to sit still? Or could I position this to be less annoying? (Targeting hips, lower spine)

I have no tips as I have not used the Assisi Loop, but I have done some reading up on it. After what I have read so far, I am not surprised by what you are experiencing with Krista. I just don't know, unless one would have a very subdued cat, how one would get the loop to stay in place. And, the placement, depending on where it needs to be probably makes it even more difficult in some cases.

Are you also reaching out to the Assisi Animal Health organization to see if they can put you in touch with some of the partnering organizations for advice/tips? They also have a pet owners section, as well as a blog.

I suspect you have already gone down this route, but if you didn't you might want to try!

It only just arrived yesterday. I wanted to use it a few days before I contact their customer service. I already had a good conversation before I purchased it. It’s a football shaped treatment field extending from the center of the loop like if the loop were a cross-sectional slice. The 20 cm loop is very forgiving on a small animal like a cat. The trick is just getting her to stick with it. I have found that rather than trying to position it perfectly across her pelvis, if I let it be a little askew she doesn’t seem to mind as much. It probably doesn’t feel as restrictive if it isn’t laying across both hips. I think it’s less sensation like she can feel anything from it and more annoyance like “what is this thing you’re laying on me?” that keeps her moving from under it. I have had her move clear across the room from me when I try to groom her with the brush she doesn’t like. Getting up to shake it off is an annoyance reaction. If I wait until her post-meal naps, it’s a lot easier to get her to forget about it. Best of all, I’ve been using it for a day now and her poops remain unaffected. Better than I can say about any other product I’ve tried for her arthritis so far.

I wasn't meaning to contact customer service from a complaint standpoint - I thought perhaps between the tips/advice section and their blog you might find similar incidents with other cats and some of the users might have come up with some solutions as to how to keep it on their cats.

Post-meal/nap time application sounds like the way to go!

I didn't think from the way it is supposed to work that would affect her poop (hence, the reason you wanted to try it, I am guessing) - other than if it were to stress her out somehow. I hope not!!

GlycoFlex, Cosequin, even salmon oil all affect her poops. Only salmon oil is actually manageable with her. Even then it was 50/50 whether it would be a good poop or on the softer side. This is precisely why I wanted to try the Loop over the Adequan shots.

I don't blame you! I also read the Adequan causes blood to thin (and, must be stopped in the event of any upcoming surgery) - I am not impressed with that either!!
K

daftcat75 have you put the loop on one of your joints? Not that you have arthritis but it might help to give you an idea of how it feels to her, which might help in positioning it. Does it feel better over the boney part of her hips or a little away from the bone? That sort of thing.

It works on inflammation and I certainly have my fair share of that. There isn't any treatment field to be felt per se. The only sensations to be felt would be a result of the treatment itself such as warmth, or tingling in extreme cases, from increased blood flow if the areas weren't receiving great blood flow to begin with.
K

I would try it myself but it takes up to 4 sessions a day for the first 3-6 weeks or until results are seen. Then depending on the amount of healing needed, I can continue at 4 a day or back off to 1-2 a day. As the Loop has a 150 sessions (it's a non-rechargeable device), I expect she will use up her first Loop in the first month. But if it works for her, we could probably get several months out of subsequent Loops on a maintenance schedule. Maybe I can share her loop after she's finished the loading dose so we don't burn it out too soon.
K

Ah, keep trying to find the most comfortable position on her for it. That will make a difference in how well it works. It she's tense it won't work as well due to an endocrine dump as it would were she relaxed.

This wasn’t the worst way to get compliance out of her. I called her into my lap after her dinner (which doesn’t often work so that itself was a small miracle) and gave her a session while she rested in my lap. Probably can’t get much more relaxed than this. 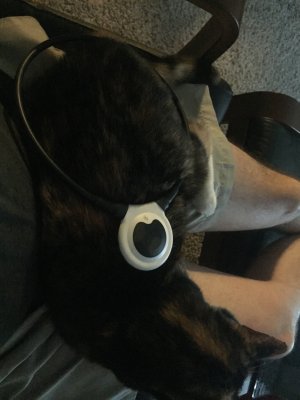 Except maybe this. After her session. That’s one loose, flat cat. Like she just had a good massage. From the inside. With EMF. Having completed a second day with the Loop, I believe I understand better what was going on the first day. Definitely an annoyance thing. If I place the loop on her with the battery down like in the pictures in the first post, then the battery acts like a weight on the loop. There’s a constant pulling force. But if the battery rests on Krista like in the first picture in the post above, she quickly forgets about the whole thing and keeps on napping like it’s not there.
You must log in or register to reply here.
Share:
Facebook Twitter Reddit Pinterest Tumblr WhatsApp Email Link