Advice-Cat with some medical issues has been hiding more often after eating.

My cat, Kirby, is 16- he will be 17 in June. He was diagnosed with Stage 2 Kidney Disease and also Hyperthyroidism last year. We have actually gotten him to a point where both his Creatine and his Thyroid numbers are pretty stable right now, which is great! At our last visit, we discovered he had a bit of deterioration at the disks of the spine, so he may be having some nerve pain. We tried to get him some of the medicine (Gammapentin) but it was difficult to get him to eat it so we haven't tried again yet. (this was last week)

He has gotten a lot more sensitive to noise, and has taken to hiding/sleeping under the bed for a lot of the day. His appetite is up and down but he will come and bug me if he's hungry. Today however, he came and asked me for food and after I gave him a small amount he took a few bites and then bee-lined back under the bed. Nothing was loud, no one was making any big movements. I brought him the rest of the food (near the bed) and he ate all of it. I'm not sure if maybe he got some sort of pain, or what. But now he's back under the bed and won't come out for any more.

I've also been hearing his stomach gurgle a lot after eating, but he hasn't thrown up his food.

I worry because he's so far under the bed we can't reach him, but I also don't want to remove his safe space.

Anyway, I know this is long and complicated- just looking for advice from some kitty experts! Other groups on Facebook have been a bit fatalistic and have made me even MORE worried, so I was looking for any kind of advice

Thank you!
(Here's an added pic of the man himself) 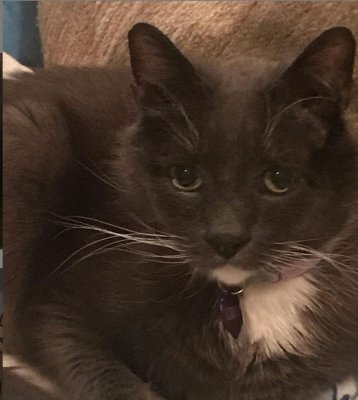 He is beautiful! I know it is worrisome, but ageing cats often have pain that we don't know about. A cat that is sick or in pain will hide away, it is instinctive. Is his medicine liquid or solid? The liquid usually is easier to give, I put mine in a half package of Delectable Lickables in the STEW and my cats eat it right up. These are found online at Walmart and Target, In store at both and at Dollar General. Pills can be crushed (sometimes, ask your vet to be sure, you don't want to overdose him) and mixed in. Sometimes, if you know of something he really likes, you could break them up and put them inside a tiny piece of cheese or put a tiny bit of Cat Pill Pocket on the side of them and 'cement' them to tiny pieces of bacon. cats usually swallow them right down. If they are pill form I would ask for liquid. He may be in pain and needs some relief.

Hi. Other 'tricks' to try with the Gabapentin would be:
1.) 'juice' from canned tuna and chicken, and then give him a piece of the meat as a treat afterward
2.) baby food meats (Gerber Stage 2 or Beechnut)
3.) lickable treats, such as Applaws, Wholehearted, Tiki Cat Stix, Inaba Churu, Vitakraft - just to name a few
4.) Tiki Cat Mousse (which is complete meal, not a treat)
Just a scoop or two of any one of these to mask the meds, and to ensure you know he takes all of it.

And to start off with, try a very low dose of the Gabapentin. If the dose is too high, it could make him kind of 'out of it'. You can always gradually increase it if the small dose doesn't seem to help. Have you considered other supplements that could help - glucosamine, chondroitin and/or green lipped mussels? I give Feeby Glyco Flex Plus for her arthritis which contains all of these items. It can be given to Kirby even if you administer Gabapentin too.

Do you have his food bowl elevated so that he doesn't have to lean down to eat? If not, try that and see if that might help - he may be feeling some pain due to the way his neck is positioned while eating. The stomach growling might be because he feels discomfort when trying to eat so he is eating less at one time to avoid any pain that his position might be causing.
Last edited: Apr 12, 2021
S

FeebysOwner- Our Vet has been working very closely with us, and Kirby is on a very very small dose of the Gabapentin (we were dividing a capsule into thirds!)


Both- These are all great suggestions, Thank you so much!
We've been giving him Azodyl for his Kidney Disease which has been easily mixed into food (since it's just a probiotic) but the Gabapentin capsule was bitter and he was able to pick it out of the food.

We have some of the lickable treats handy from when we were switching him to the kidney diet, so that could work! We were hesitant to try liquid because we weren't sure we could get him to drink it straight but adding it to a soft food is a great idea