Latest project from my sheetmetal/welder friend.
Not bad considering he only discovered a year ago he could do this sort of stuff. I have posted this one before but this was an anniversary present for his wife and his first serious attempt at making arty stuff. 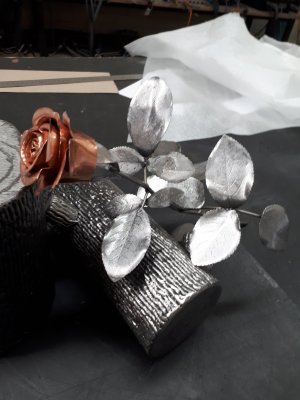 Your friend is so talented!

Silver Crazy said:
I have posted this one before but this was an anniversary present for his wife and his first serious attempt at making arty stuff.
Click to expand...

I must have missed that post so thanks for showing it to us again. Your friend is definitely gifted.

Oh wow, that is awesome. Do you weld to make that?

He is super talented.

Its TIG and MIG welded....its not bad from a guy that learned his trade building ships..its like a Hells Angel making doll houses..lol
He is getting orders for stuff now and he downplays himself so much he is only charging a couple of hundred dollars so I told him off and told him stuff like this is worth thousands..hasn't got a concept of art values..needs a manager.
Just worried about him making something he has poured his heart and soul into making, selling for a pittance and some one else selling it on for a fortune.

It must be wonderful to discover a latent talent like his.
I'm still searching for mine.

Have him take a look and maybe sell on Etsy. He can scope out what others charge for this type of art and price his accordingly.