I'm starting a new BIRTHDAY thread for all our wonderful cats who are celebrating their special day.

Beginning January of 2021 post your cat's birthday or Gotcha Day here so we can send our best wishes. Please feel free to tell us a little something about your cat and post a pic or two if you would like. Looking forward to a new year with many wonderful birthdays.

I'm going to post early because I will forget

Amber will be 8 on January 5th, her Gotcha day was 11/5/2013. The first pic is her when she was hanging out around McDonalds and Taco Bell, it took me over a month to finally 'get her'.

I initially saw her on a busy street in the shopping center and kept going back to find her, feed her and catch her. I'd stay up late and drive up to McDonalds around 2am a lot. She didn't want to be caught I even baked some fresh cod for her one night. I worked hard to get her in a public space. One night I was there with some good food and there she is sitting under a running car next to me eating french fries the ppl where giving her. SIGH

Then I didn't see her for about 10 days and was worried sick wondering if every dead creature on the road was her. I was in the next town and going to go eat at Taco Bell after shopping and God told me to go to Taco Bell in my home, so I did. I went in and ate and as soon as I walked out the door there she was and I said aloud 'There YOU are' and she loves me saying that still. I ran home and got a carrier and some canned food and low and behold I was able to just pick her up and put her in the carrier and now she is my DH best friend (traitor).

Happy early Gotcha Day Amber!!!
She is such a stunning cat. Her eyes and long fur are breathtaking! Thank you for rescuing her! It is clear that you have given her a wonderful home and she is very happy. I’m so glad you two found each other

Thanks for rescuing her. She's an absolute beauty.

You are one lucky cat and extremely beautiful, if I say so myself.

Its the 2nd year Gotcha day for Blue today.
He has come a long way from the savage little brute he was to the crazy , mischievous fun cat he is now.
Love my little (well, not so little) rambunctious cannonball buddy. Happy Gotcha Day to you and Blue!

Blue is such a beautiful boy and I am so happy you guys found each other!

Today is Tux's 7th birthday (or rather the day I picked as his b-day since I don't know the exact day). I took him in a little over 6 years ago, he has come along way, and I do see tiny improvement over the years, especially now that he is getting older, but still pretty much semi feral. He has always been more a lover then a fighter though, and does everything in his power to avoid having to resort to violence.

I think he loves me in his own way, even if I can't pet him, (Could just be he sees me as the food, treat, and toy supplier though

) but his real love is my collie. 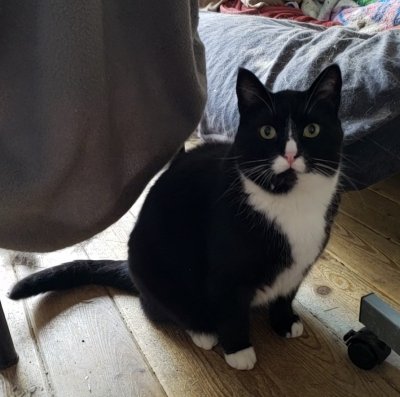 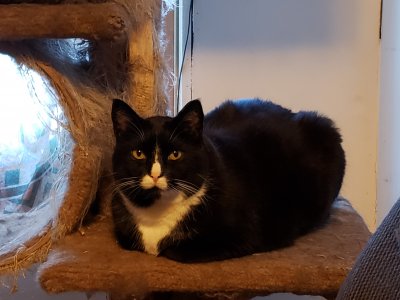 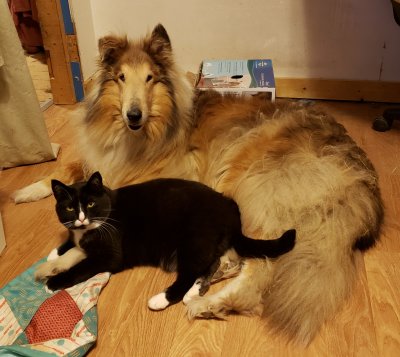 Happy birthday beautiful Tux - his canine friend is gorgeous, too!

Happy Birthday, Tux! He is such a handsome fella.

Thank you for taking him in and taking care of him!

Glad to hear you are more of a lover than a fighter and especially glad your BFF is a Collie.