The Pagoda fountain continuously recirculates 70 ounces of fresh, filtered water. Best of all, the stylish ceramic design is easy to clean and looks great in your home. The upper and lower dishes provide 2 drinking areas for pets, and the dual free-falling streams keep water tasting fresh, which encourages your pet to drink more. 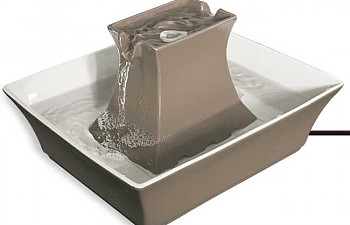 The Drinkwell Original (called DOF for now on) was returned two days after buy it as I found it to loud and not sure if Zoey, the cat, would use it. It was made of plastic, held 50oz of water and it had a adjustable flow control which after playing around with it I personally found it didn't control all that much, so back it went.
I then picked up the Drinkwell Pagoda Fountain (called DPF for now one). which holds 70oz of water, made of ceramic, has two free-falling streams and has two filters that are optional to use.
Putting it all together was easy and fast, there is one part that is a little rubber sock that fits on top of the post the pump wire goes down to get under the fountain, I question that part as the more you clean the fountain and flex that sock around I can see it ripping or some how getting damaged, not 100% sure if that is a big deal; not sure if water would make its way down the wire and leave a puddle under the fountain, I guess time will tell and I suppose a plastic baggy with a rubber band would fix it up. The DPF runs nice and quite the only real sound is the water hitting water, which is 100 times better then the DOF. The pump itself is suction cupped to the ceramic bottom of the big dish and the Foam pre-filter goes around the pump which gets pumped into a white housing that holds the carbon filter then it goes to the top of the free fall fountain, all this is under the brown'ish ceramic tower in the middle that just sits there in the bowl. The tower itself is not fastened to the bottom of the dish in any way but it does seem to be heavy enough to not move around even with more then one cat around it.
All and all I am happy with it. The construction of it was hands down better then the DOF and the amount of water that it circulates is more then adequate.
I have a DPF also and it works very well. My cats took to it instantly and loved it but the dogs took a week or two to adjust to it. With the fact that there is two dogs (1 big and 1 small), it is constantly topped off daily but it does seem to encourage all them to drink more.
I own a Pagoda fountain. I have one cat that loves fountains (and any water source really) and she drinks nearly 8 ounces a day from it. My other cat thinks it's part of the decor. Fairly easy to take apart and clean and the filters are reasonable and easily available. Initially we found the sound of constant running water irritating but adjusted to it after a week or so.
You must log in or register to reply here.