Siamese cats are popular among cat owners for their elegant appearance and exotic origins. If you have an interest in Siamese cats, you might be wondering about the Siamese flame points. We have done extensive research to bring you everything you need to know about this special color variation.

In this post, we will discuss how genetics determine cat coloration and, more specifically, how flame point Siamese cats get their gorgeous reddish coloring. We’ll also cover many other flame point-related questions. So be sure to keep reading. 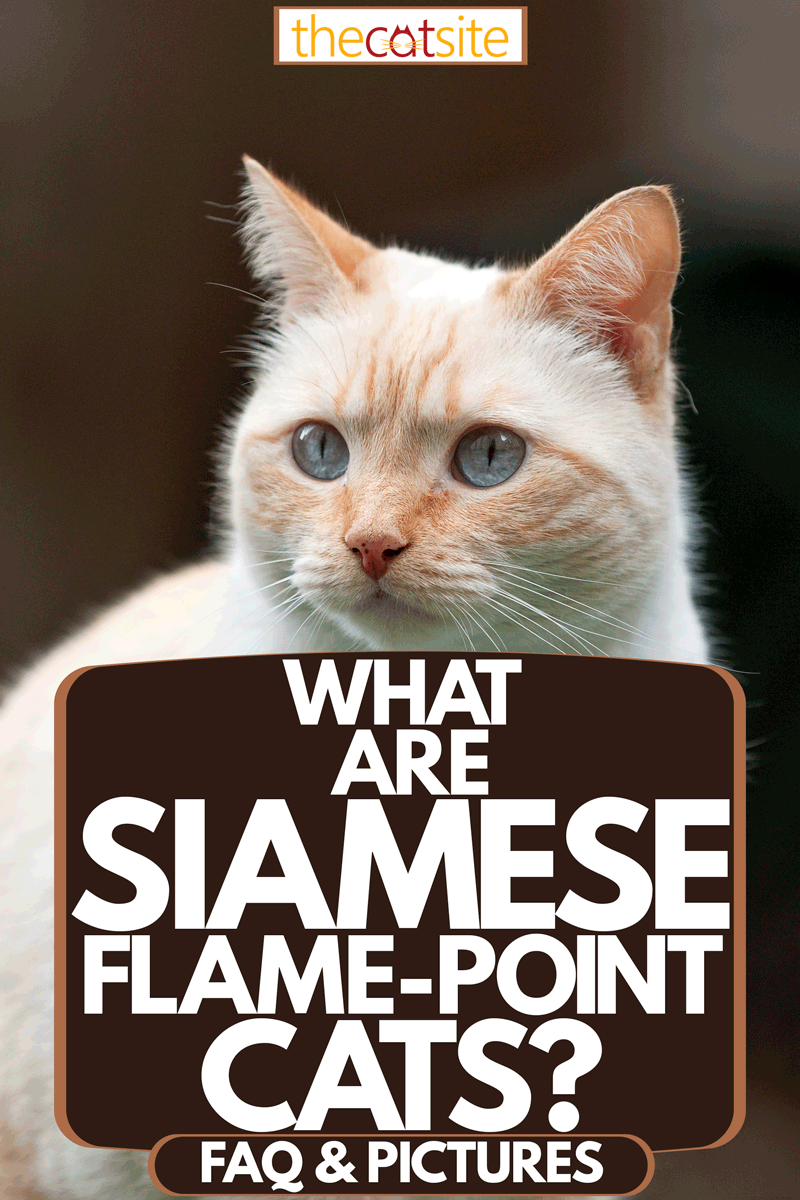 What creates the colorpoint pattern?

The color in a cat’s coat is the result of pigmentation of the individual hairs. The pigment molecule involved is called melanin and it’s produced at the base of the growing hair. Without melanin, we get light colors, such as white or cream in the coat. Lack of melanin in the eye creates blue eyes.

When the body produces melanin, it uses an enzyme called tyrosinase. Colorpoint cats have a mutated version of the enzyme which is sensitive to heat. When it’s too warm, the mutated tyrosinase in colorpoints simply won’t work, preventing the production of melanin. The cat’s paws, face, ears and tail are cooler because they are further away from the core of the body. The reduced temperature allows the mutated enzyme to effectively participate in the creation of pigments, resulting in darker fur in those areas.

Interesting fact: Colorpoint cats are born entirely white (or light-colored). While the kittens are inside the mother cat’s womb, even the extremities of their bodies are securely surrounded by warmth. The maternal body heat renders the tyrosinase useless, so the kittens cannot produce pigment and remain white in the womb. Once the kittens are born, their body begins to produce melanin in the cooler areas, so that within a few weeks, they begin to show the distinct colorpoint pattern.

Colorpoint is a recessive gene. Two pointed cats (such as two Siamese) will always produce pointed kittens. Pointed kittens can also be born in a litter if both parents carry the colorpoint gene, even if the parents themselves are not pointed. 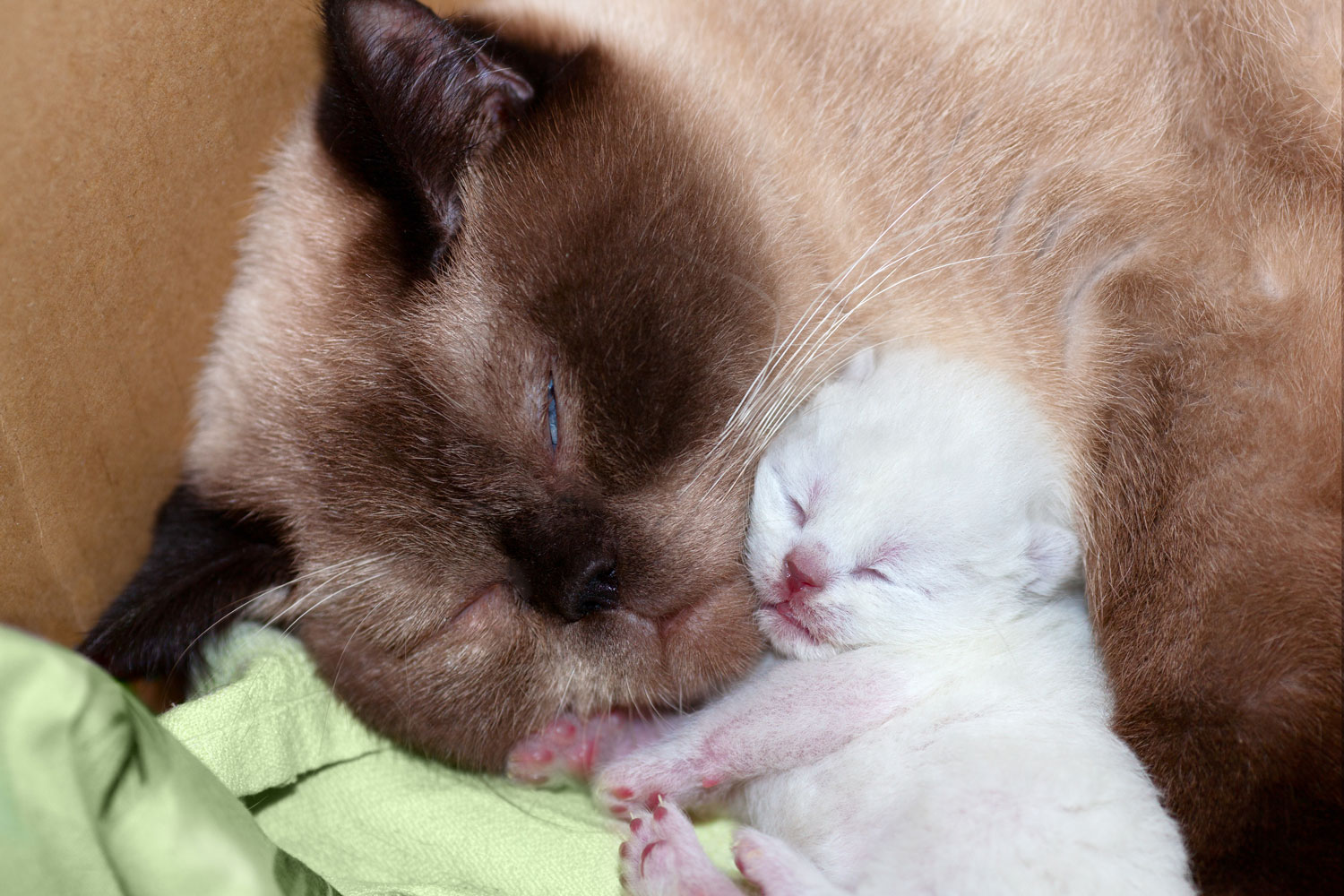 Red is not a recessive trait, so it cannot be “carried.” Like other red tabby cats, flame point cats always have at least one red or tortoiseshell parent.

With many flamepoint cats, the tabby pattern is visible in the rings on their tail and the distinct “M” shaped mark on their forehead, typical of tabby cats. 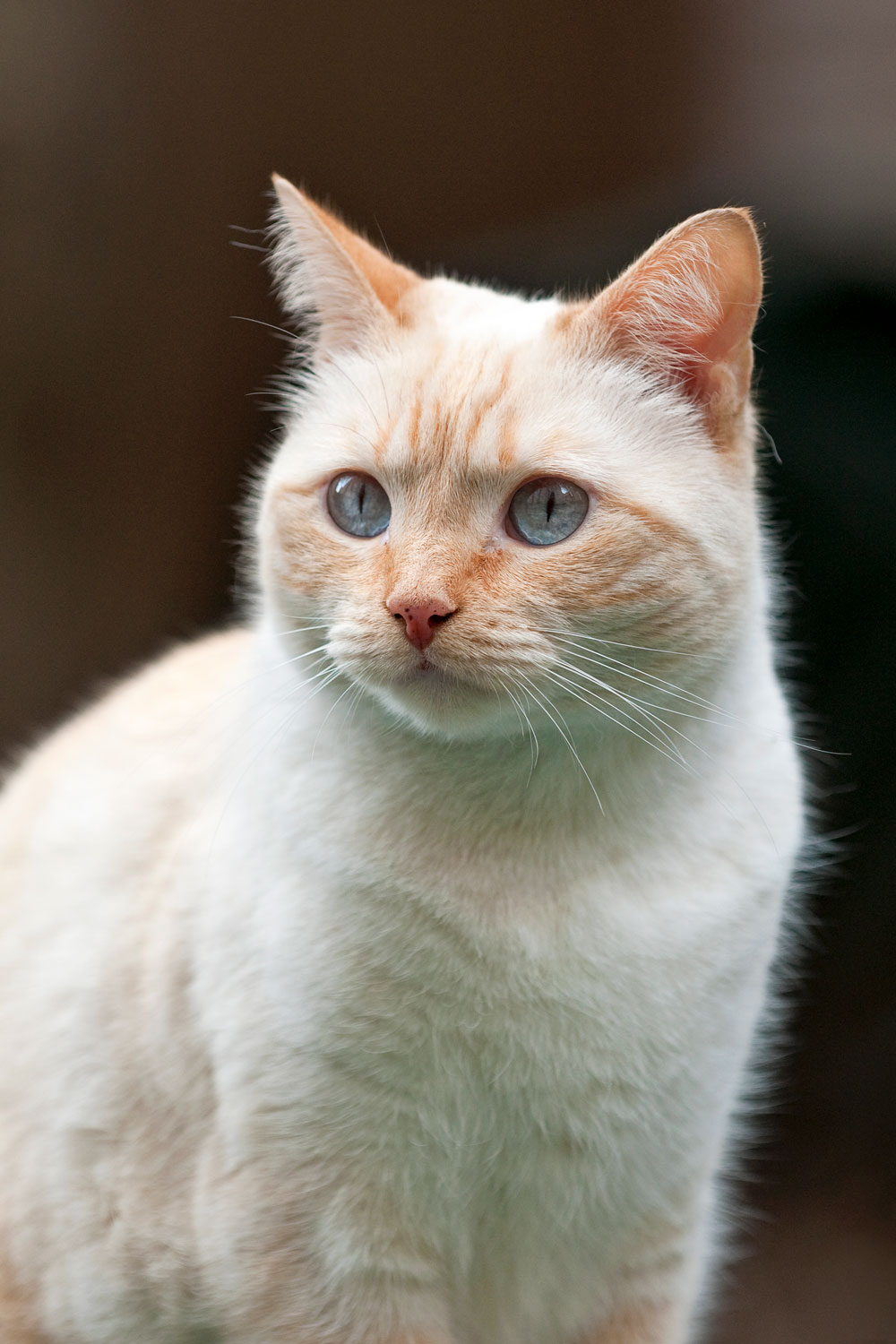 Flame-point or red-point cats have many fans. The combination of the reddish face and blue eyes is unique and adorable!

Read more: All about Tabby Cats

All Siamese cats share the colorpoint coat pattern and have blue eyes. The Siamese breed has always been a relatively slender, elegant cat. The show standard calls for this breed to have a long body with long legs, large ears, and a wedge-shaped head type. Over the years, cats bred towards this show standard have gradually become more extreme in type, and are sometimes known as “modern” Siamese cats.

Some lines of pedigreed Siamese cats, sometimes known as “Traditional” or “Old-Style” Siamese, have a more moderate type with somewhat rounder heads and bodies. 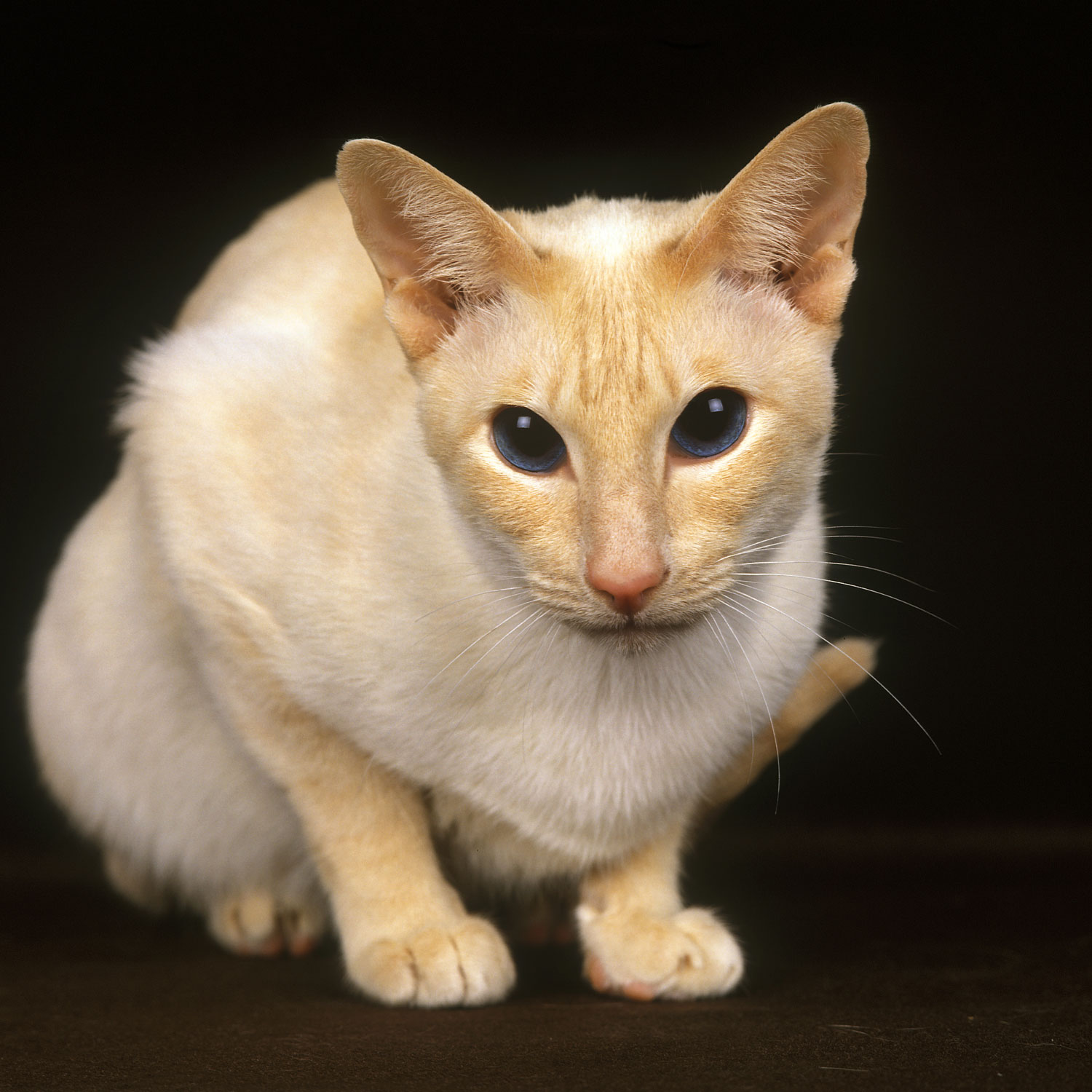 As for the color of the points, not all associations accept flame point as an allowed color in Siamese show standards. In the Cat Fanciers Association (CFA), the Siamese breed only includes cats in the original four colors: seal, chocolate, blue, and lilac. Flame points, tortie points and lynx points are considered to be part of the Colorpoint Shorthair breed in CFA.

The International Cat Association (TICA) on the other hand, allows for flame/red points. Their breed standard allows points to be of any color, as long as they are clearly marked and distinct from the background color.

How Common Is The Flame Point Color?

Flame point is an uncommon color in cats. After all, flame point is a specific variation of the recessive colorpoint trait, which in itself is not common.

As mentioned, some registries and clubs, such as the Cat Fanciers’ Association, don’t recognize flame point cats as Siamese. In CFA, these cats are known as Colorpoint Shorthairs, while in TICA they are considered Siamese. Whether or not the color is allowed, these cats tend to be less common than other colors of Siamese.

Flame point is not exclusive to the Siamese breed. There are also other recognized breeds that allow flame point (red point) as a color option, such as Ragdoll, Himalayan, Siberian (Neva Masquerade), Devon Rex, and many other breeds.

Flame point cats also appear from time to time in shelters and rescues. Most of these cats are not closely related to any particular breed, but share the flame point color. 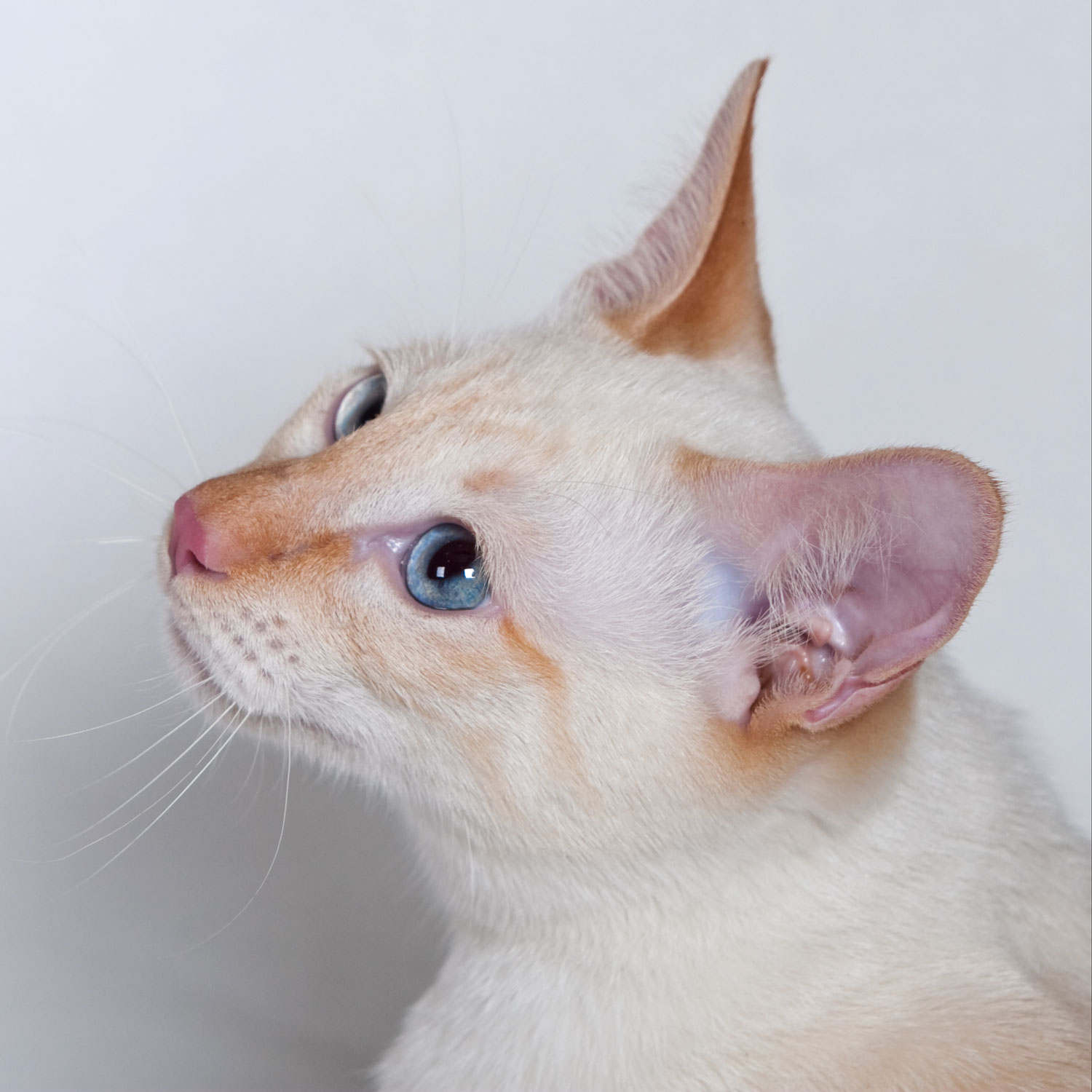 What Other Colors Do Siamese Cats Come In?

While professional cat associations across the globe do not agree on the status of the flame point color within the Siamese breed, they are in agreement on other colors that official Siamese cats can have. These colors are seal, chocolate, blue, and lilac.

The most traditional variation is the seal point Siamese. This cat has dark, almost inky, brown points with a cream-colored body. The color of the points is reminiscent of the color of a seal, hence the name.

While also brown, chocolate point Siamese cats have lighter extremities and white bodies. While seal points are a darker, oily brown that almost verges on black, chocolate points have more noticeable highlights and variation of shades in their extremities.

Bluepoint Siamese cats have a whitish-colored body with a bit of a steel blue tint. Their points are a steel greyish-blue.

For more information about Siamese cats, check out our article “Siamese Cats”.

What Other Breeds Come in Flame Point?

Aside from Siamese, there are other breeds of cats that can have flame point coloring. Some of the most well-known ones are Persian, Himalayan, Colorpoint Shorthair, and Ragdoll. Keep in mind, though, that flame point simply refers to a cat’s fur coloration. It is possible to have a cat with flame point coloring that isn’t any of these breeds but instead is simply a domestic cat, either shorthaired or longhaired.

Two popular breeds that support the flamepoint pattern are – 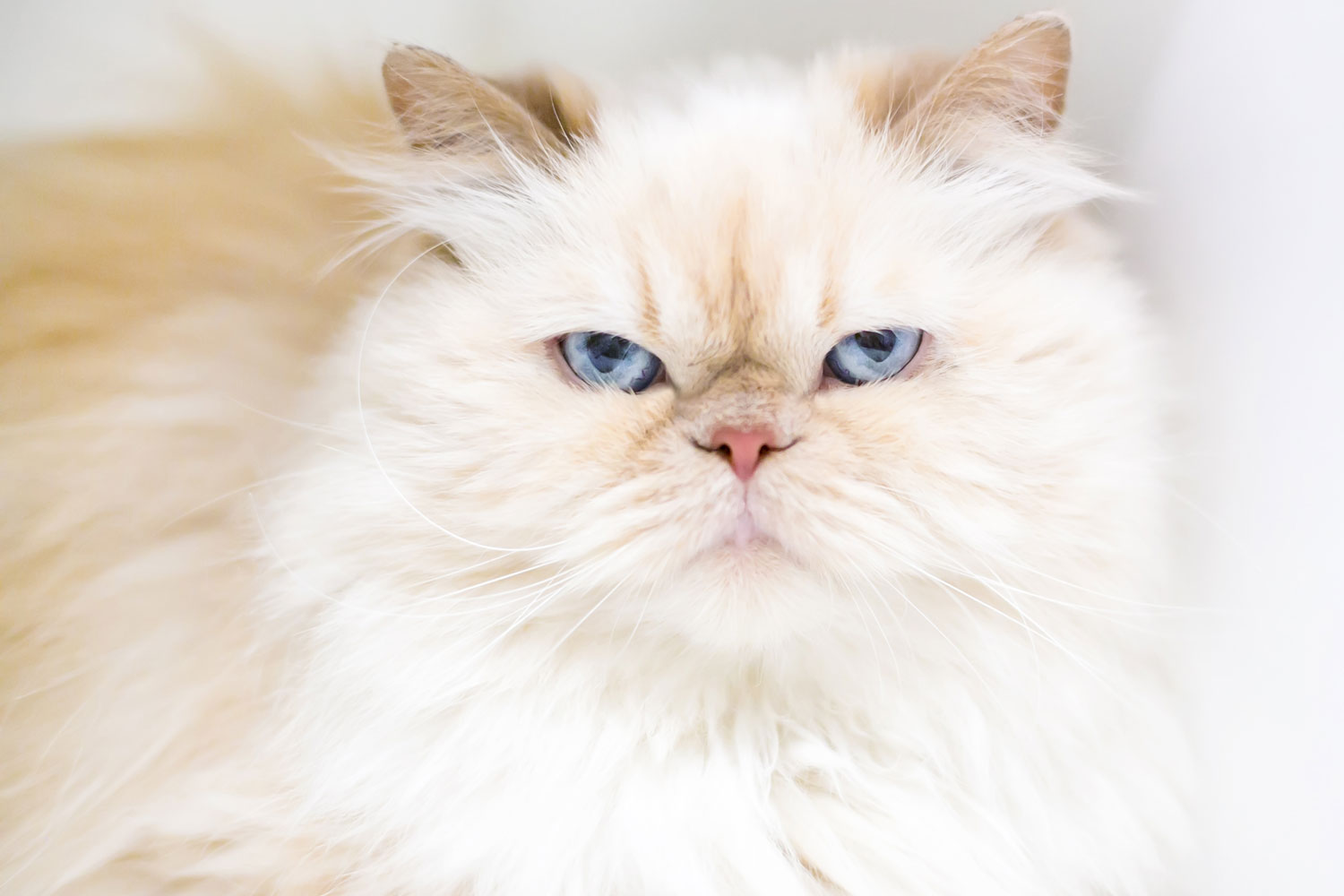 Flame point Persians are also considered to be Himalayan cats – a variety that was originally created by combining Siamese and Persian cats. These cats are similar to Siamese in that they have a cream-colored body with flame point coloring highlighting their extremities. However, they are otherwise identical to Persian cats in build and facial shape. 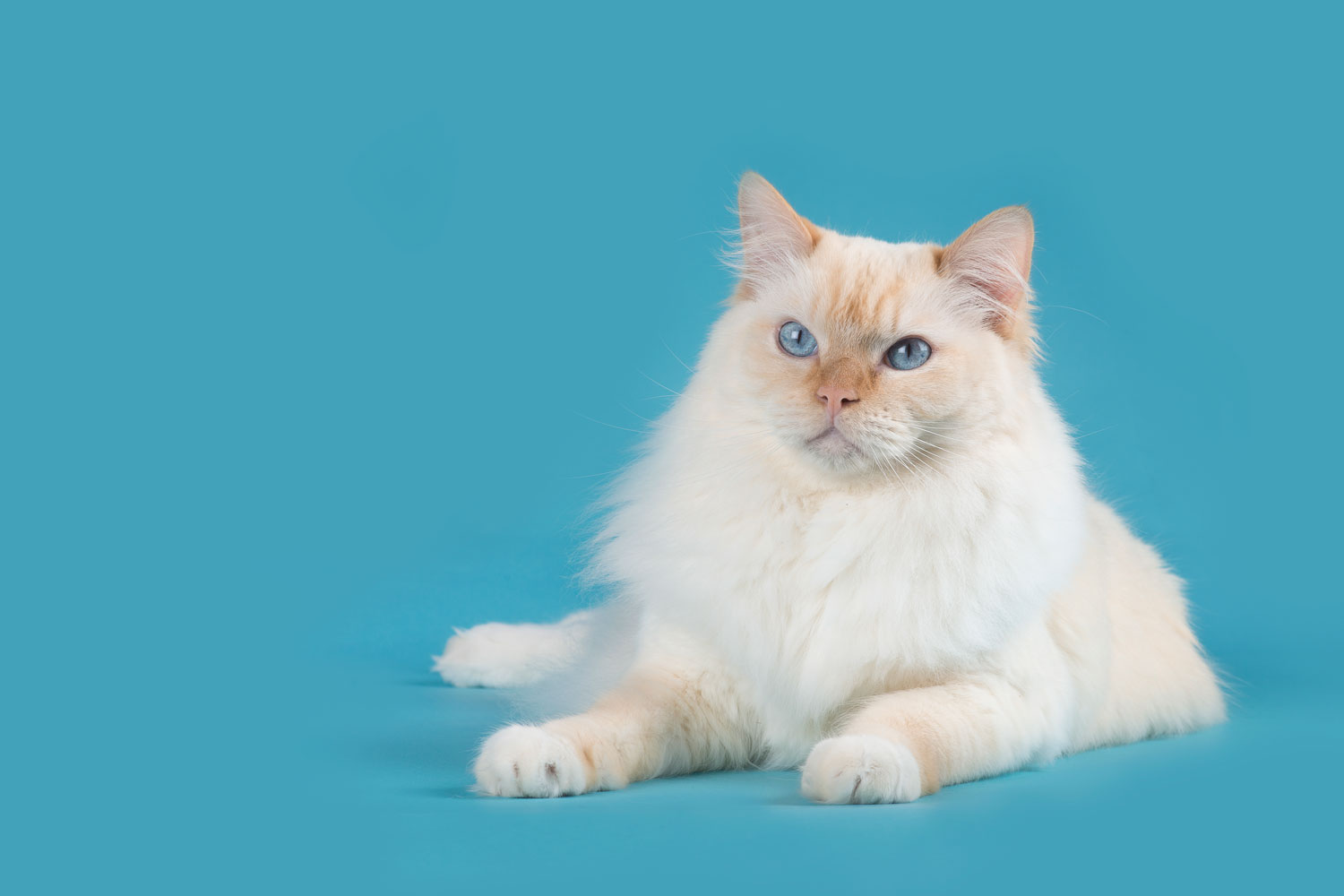 A flame point ragdoll has an off-white body with reddish markings on the head, tail, and legs. Ragdoll cats often have white markings on their paws and face, as well. Ragdolls are somewhat similar in appearance to Himalayans because of their long fur.

Siamese cats are affectionate, social, and relatively high energy. Because they enjoy playing and can be persistent to get what they want, their assertive and dominant personality is sometimes misunderstood as mean or aggressive. Siamese cats are very intelligent, so they quickly learn how to get what they want from their owners. Remember that your cat is always paying attention and learning from what you do. Use positive reinforcement to encourage desired behaviors, and make sure not to reinforce negative behaviors.

Before choosing to purchase a cat of any breed from a breeder, you should learn as much as you can about the breeder’s household and cattery, how the cats are kept and how the kittens are raised. While there are many reputable and humane breeders, not all breeders are responsible and dedicated to their cats’ welfare. Take a look at our article “Breeding Cats: What Cat Owners Need to Know” to learn more about cat breeding and what to look for when choosing a humane breeder.

Reputable breeders may have price differences between kittens, but should not charge significantly more money for a specific color because it is “rare.” In terms of behavior, health, and personality, flame point Siamese kittens are similar to other Siamese kittens.

While flame point Siamese cats should be purebred, some people breed unregistered pointed cats that are not really any particular breed and misrepresent them as “Siamese.” If you are looking for a specific breed of cat, be sure that the breeder you purchase from provides sufficient documentation to prove the breed of the cat’s parents.

The flame point coloring also appears in non-pedigreed domestic longhaired and shorthaired cats. If you are interested in adopting a flame point domestic shorthair or longhair, and none are available at your local shelter, you can try searching for flame point cats on a reputable online matching service such as Petfinder. At any given time, there are usually a large number of flame point cats in shelters and rescues needing homes. 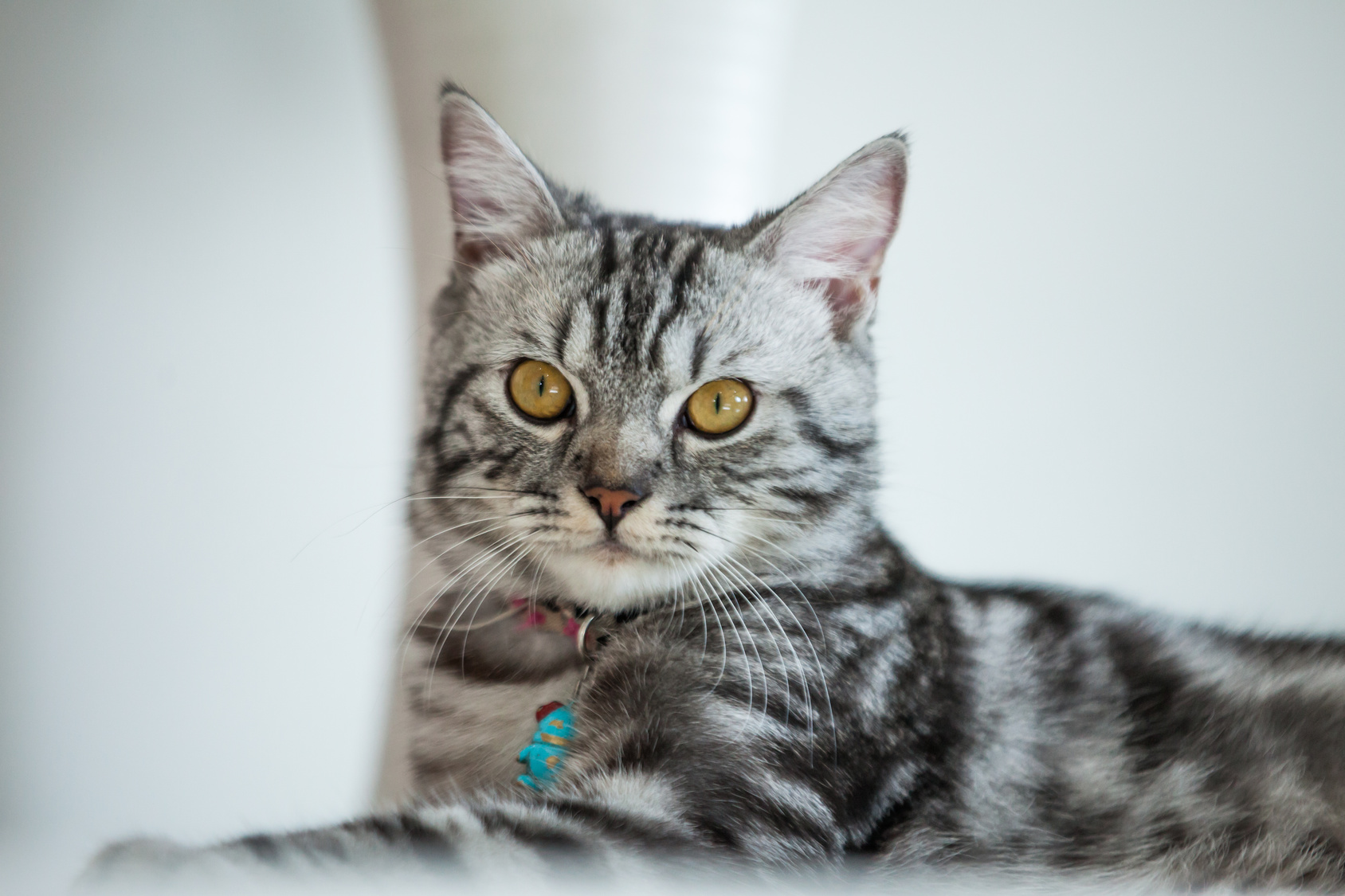 One comment on “What Are Siamese Flame-Point Cats? [FAQ & Pictures]”

I found your article very informative, I managed to get a flame point siamese when my torbi got pregnant from an orange bengel tabby. He is all of the things you said, talkative, highly energetic, will go to the ends of the earth to get what he wants, usually my spare stash of catnip mice. He is harness and leash trained, and loves his kitty stroller, anyway thanks so much for giving me the genetic information about my little man.