Unfortunately, cats have bad habits of swallowing things that weren’t intended to be swallowed.

Dr. Patricia Hague, the owner of the Cat Hospital of Las Colinas, said that it never ceases to surprise her, the things she pulls out of a cat’s stomach. She treated one cat who tried to eat a balloon, ribbon-first. Another cat swallowed an embroidery thread that happened to have a needle at the other end. Fortunately, they both survived.

Sondra York, the former cat chairperson for the Animal Rescue League, in Denton County Texas, recommends keeping a close eye out for rubber bands and string which could be swallowed, and then, consequently either wrap around the cat’s intestines or cut through them like a saw. Paper clips, pins and needles can puncture the stomach or any organ in the digestive tract as well, so caution should be exercised at all times.

Be sure to pick up any tiny objects you find on the floor. Anything that could choke a baby could harm your cat. Remove loose buttons, string, yarn, or bells from cat toys. If your cat pulls one of these items off, it could strangle him or lodge in his intestines.

Milkcap rings are fun for cats to play with, but be sure they aren’t getting worn out; they tend to fray and break into pieces. The broken bits hold the same dangers as buttons. If they start tearing, throw them away.

Sadly, whoever first coined the phrase, “Curiosity killed the cat,” really knew cats. Many an inquisitive cat has lost its life by becoming curious about a common household appliance.

“I was horrified,” York recalled. “As I walked away from the (clothes) dryer, I heard this ka-thunk, ka-thunk. I opened the door and there was my Snowshoe cat Ling Ling. I dread to think what would have happened if I had ignored the noise.”

Ling Ling, dazed and dizzy, staggered around for a few minutes, but she survived.

Jane and her cat were not as fortunate. Walking away, she also heard her cat, but by the time she could open the door, it was too late, he had already broken his back.

To prevent these types of tragedies, always visually inspect the washer and the dryer before using them. Test the wet clothes in the dryer with a few shakes of the clothes as added insurance.

For kitties, the kitchen is a maze of land mines. Cats have been known to jump on searing hot stove elements and suffer severe burns.

It seems no room in the house is immune from cat danger. Mary lost her kitten when it fell into the open commode and drowned. Keeping the toilet lid closed could also prevent a crushing blow to a cat curious about water. It is unwise to encourage your cat to drink from the toilet bowl. Besides the danger of drowning, there is also the possibility of bacterial infections from the water.

While some of the accidents with appliances are freak occurrences, a little precaution costs nothing and could ultimately save your cat’s life.

Dusty Rainbolt is an award-winning cat writer. In her spare time, Dusty writes product reviews for Catnip and Whole Cat journal so she can get cat bowls and other free stuff. She also co-authors a monthly column with Hobbes Egan for City & Country Pets.

Comments? Leave them in the comment section below. Questions? Please use the cat forums for those! 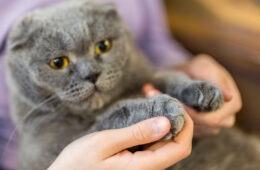 Declawing – More Than Just A Manicure 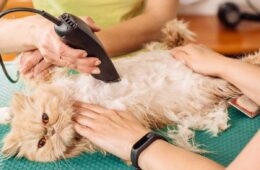 How to Deal With Matted Cat Fur (3 Options Explored)

6 comments on “Cats And Hidden Dangers In The Home”

This is an old article, but I only just found it, and I wanted to add--keep the cords to your curtains/blinds out of reach! They tend, but cats love to play with them. An old friend of my brother's came home from work one day to find her cat hanging from her blinds. It was awful.
my cat is a inside cat , but in the summer time he likes to go out in the garage and sleeps on a chair until night , when he comes in and sleeps behind the couch . I don't understand him not wanting to stay in a cool house .Sometimes I worry that he will get sick out there . Is this normal , He is 15 yrs old and still in pretty good health .
I came home one day after work and could not find one of my cats. They ALWAYS meet me at the door. I found my tabby in a terrible emotional state under my bed. She had urinated and messed all over the house. She had a habit of licking plastic bags (like you get at the grocery store). Without thinking, I left one out and she got her head stuck in the handle of one of those plastic bags and freaked out. She might have been wearing that bag most of the day. I recommend not leaving things out that could get the best of a curious cat, no matter how simple the item.
Interesting article.  My cat loves to run into the refrigerator when I open it - and disappear into the dark depths.  I have found it more productive to simply close the refrigerator door and set the timer for one minute.  By then she's ready to come out on her own and I can warm her up.   If I instead try to get her out immediately it becomes a losing game (for me!) of her going into the farthest corner in the back. :-)
One of my cats will hop in if you open ANYTHING, so you always have to be aware. There have been times he has spent an entire day in a coat closet when he has run in there and he has been shut in inadvertantly when I was on my way out of the house. Now I always leave the closet open a crack just in case. He just jumped in the refrigerator the other day when I was getting a few things out, and so fast he was in there before I could stop him...but fortunately I noticed him jump in so I could remove him before closing it. Remember that could be deadly too because refrigerators are air tight. With a cat like this, or really with any cat you have to be aware at all times and check any sort of item before closing it in case your cat is in there.
This is a good article. I am going to share these safety tips with my daughter, so we can both work together to keep Cheddar and Colby safe. The only thing that surprised me was no the lack of mention of chemicals and cupboards. I figured that would be a main safety point, to use some sort of protective device to keep the cats out of the assortment of cleaners under sinks and in closets.